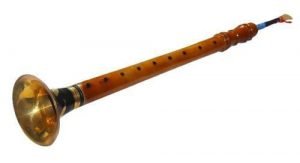 Shehnai is a double reeded wind instrument with a widening tube towards the lower end and having eight to nine holes, the upper seven for playing, and the lower ones for tuning. The Shehnai is called ‘mangal vadya’ or ‘auspicious instrument’ and is played on all festive occasions in India. Shehnai is one of the oldest wind instruments, having been present in the folk panorama of India for many years. It is known by various names like ‘mohori’, ‘kuzhah’, ‘mukhaveena’, ‘sundri’, ‘naferi’, ‘mela’ and ‘nagaswaram’ in folk music, depending on its size and the region. Shehnai is always accompanied by a drone instrument called ‘shruti’. Shehnai is of Persian origin and was brought into India by the Mughals in the 15th century A.D. and was named after its inventor Hakeem Bu Ali Shehnai. The ‘Ain-i-Akbari’ ascribes the introduction of Shehnai in India to Ustad Shah Mohammad, an expert Shehnai player. Ustad Bismillah Khan was the undisputed ‘Shehnai King’ of India. 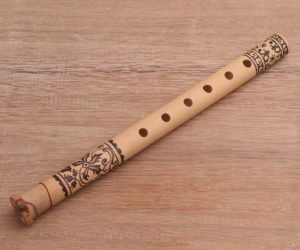 Bamboo flute is one of the oldest musical instruments of India. The flute in its many forms has been in use in India since the Vedic period. References to flutes called ‘tunava’ and ‘nadi’ are abundant in the Vedas. Numerous archaeological evidences point to the common use of flute in the religious music of the Buddhists. Sculptures at Sanchi, Amravati and numerous paintings and frescoes in the Ajanta and Ellora depict flute being used both by the humans and celestial beings. The flute holds a revered position in India for its close association with Lord Krishna. It is popular all over India and is called by many names like ‘bansuri’, ‘murali’, ‘vanshi’, ‘venu’ and ‘khuzhal’. Its two main varieties are the horizontal and vertical flutes. The horizontal flute is perhaps the only instrument to be active in all categories of music namely folk, classical, popular and devotional. It is recognised both as a solo and accompanying instrument to musical forms like ‘bhajan’ and ‘tillana’. The vertical flute is not used in classical music and is only a folk instrument popular in North India. T.R. Mahalingam, Pannalal Ghosh, Hari Prasad Chaurasia, Mahalingam Ramaswamy Iyer, the Sikil Sisters, N. Ramani, Vijay Raghav Rao and Shashank Subramaniam are some of the renowned exponents of flute.

Nagaswaram consists of a wooden conical base with seven finger holes in the body and five others at the base to serve as controllers. ‘Otta’ is the companion instrument to the ‘nagaswaram’ to provide the drone. Sheikh Chinna Moula was the most respected player of Nagaswara in the recent times. 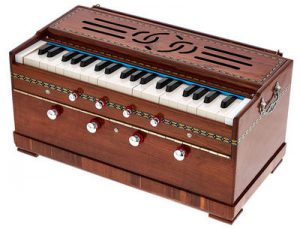 ​Harmonium is a wind instrument employed widely as an accompaniment to the Hindustani music. It is essentially a western instrument and was incorporated into Indian music sometime in the 19th century A.D. The harmonium is, however, criticised for its inability to produce the ‘shrutis’ or even the ‘meend’ or glide, which form the very essence of Indian music. The instrument has forty two black and white keys, corresponding to the equal temperament of the Western music. It is played with the right hand and the left hand activates the bellows of the instrument.

Mohammad Dholpuri, Nasir Ahmed Khan and Amir Ali Khan are some of the greatest harmonium players of India.

‘Shankh’ or conch shell is probably the most ancient wind instrument contrived by man. It is blown through a hole made in the spiral. It is indispensable in many religious celebrations.