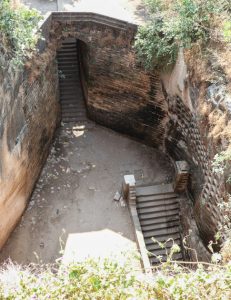 Water has played a significant role in the socio-economic life and architectural heritage of western India from the earliest times. The early Harappan towns were marked by the presence of a sophisticated system of drains, wells and tanks. Stepwells and stepped ponds, built during the 5th and 19th centuries A.D. are common in western India and over 120 such wells are reported in the semi-arid region of Gujarat alone. The stepwells are known as ‘vav’ in Gujarat and ‘boari’ in the Hindi belt. These stepwells have been named after landmarks, deities and patrons. The rock-cut stepwells made their first appearance in 200-400 A.D. The construction of the stepwells initially began under the Hindu rulers but the practise was continued even after the advent of the Muslim rule in India. The ‘vav’ soon became a spectacular example of Indo-Islamic architecture and design, displaying a harmony between intricate Islamic floral patterns and the Hindu and Jain symbolism. 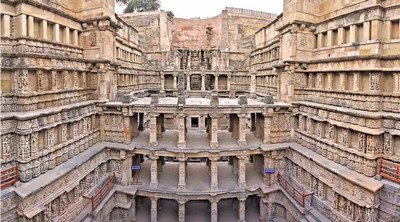 A stepwell is a linear building, whose stairs lead down to landings with pavilions and ultimately to the cylindrical well.  The oldest example of a stepwell is ‘Navghan Kuo’, cut into the rock of the Uparkot in Junagadh pertaining to the period 2-4 centuries A.D. Chronologically, the next stepwells to be constructed were the ‘Adi Kadi Vav’, the Modhera stepwell, the ‘Rani Vav’ in Patan built by Bhimadeva (1022-66) and the 11th century Mata Bhavani’s ‘vav’ at Ahmedabad. The late 11th century ‘Rani Vav’ or the ‘Queen’s Well’ at Patan is probably the most magnificent step-well in Gujarat.  Rani Ki Vav was resurrected after decades of painstaking clearance and restoration by the Archaeological Survey of India (ASI) from 1958 onwards, and was declared a UNESCO World Heritage Site in 2014. Measuring 64 metres in length and 27 metres in depth, it is a subterranean seven-storey structure, lavishly adorned with sculptures of gods, goddesses and other mythological and heavenly creatures that give it the look of a royal or divine abode. It is believed that Rani Ki Vav was built by queen Udayamati, the wife of King Bhimdeva I of the Solanki dynasty, in the memory of her husband after his death. 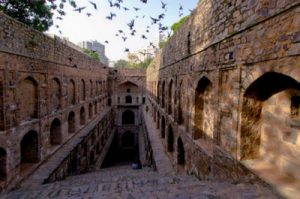 The Dada Harir’s ‘vav’ and Adalaj ‘vav’ at Ahmedabad are finest examples of the stepwells built during the Muslim period. The Adalaj ‘vav’ is a five-storey stepwell, which is octagonal in plan and is conspicuous by complete absence of figural themes.

The ‘Agrasen Ki Baoli’ in Connaught Place in New Delhi is attributed to the pre-Lodi (c.14th century) Raja Agrasen, ruler of the Agrawal community. It is a relatively simple structure, consisting of single flight of 103 steps that culminate in a water tank. The ‘Chand Baori’ at Abaneri, built around the 8th or 9th century A.D., is India’s largest stepwell and has an amazing and elaborate architecture. It has almost 3500 narrow steps in thirteen storeys. Undoubtedly, the stepwells are one of India’s most unique, but lesser known, contributions to architecture and the general socio-economic development of rural India.