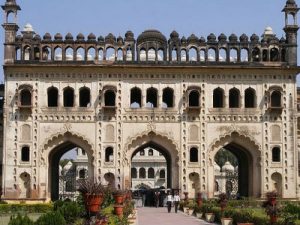 During the later half of the 18th century and the first half of the 19th century, a distinct form of architecture flourished nder the Nawabs of Avadh (Oudh), whose first manifestation was noticed in the form of Safdar Jung’s Tomb, built in 1753 A.D. by Mirza Mansoor Khan in the honour of Safdar Jung (1739-1753), who was a nephew of the first Nawab of Oudh. The city of Lucknow witnessed large building enterprises under Nawab Asif-ud-Daula (1775-1795 A.D.), mot aptly represented by the ‘Bara Imambara’  built in 1784 A.D. Absence of pillars in the main hall and simplicity of style and symmetry are its unique features. On the western side of the Bara Imambara is the ‘Rumi Darwaza’ in which ornamental designs radiate from the base to the top on both sides in a most expressive manner. The ‘Chota Imambara’ or ‘Husainabad Imambara’ built by Muhammad Ali Shah as his tomb, and the ‘Shahnajaf Imambara’, housing the tomb of Nawab Ghaziuddin Haidar are other note-worthy buildings following this style of architecture.

Towards the middle of the 19th century, the architectural style of Avadh began to be impregnated with elements from European sources. Major General Claude Martin (1735-1800 A.D.) built a large and pretentious building at Lucknow, known as “Constantia”, which was one of the first large buildings of the European style built in North India. This building set the tone for the development of a hybrid style of architecture in Lucknow depicting a degenerative combination of the Mughal and Gothic styles. The best examples of this style of architecture are the ‘Chattar Manzil’ built by Nawab Naziruddin Haider and the ‘Kaiser Bagh’ built by Nawab Wajid Ali Shah between 1845 and 1850. The ‘Roshanwali Koti’ and the ‘Begum Koti’ at Hazratgunj are other buildings where the Italian style is more prominent.

In Punjab a distinct style of architecture developed under the influence of the Mughal style. It was characterised by certain indigenous features like the multiplicity of ‘chattris’ or kiosks, the use of fluted dome generally covered with copper or brass-gilt and enrichment of arches by numerous foliations. This architecture was best manifested in the ‘Golden Temple’ at Amritsar, built in 1764 by the fourth Sikh Guru Ramdas.