Bharatanatyam is considered as the oldest form of the Indian classical dances, sometimes even referred as the “Fifth Veda”. This dance form was

recorded as far back as the 9th century and was known by various names such as ‘Sadir’, ‘Dasiattam’ and ‘Thanjavur Natyam’. 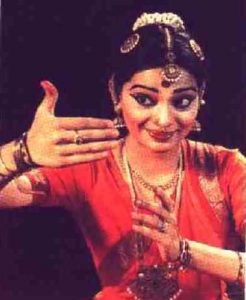 It remained essentially as a temple dance until the early 1900’s. The contemporary style of Bharatanatyam was evolved in the mid-19th century as a result of the efforts of the “Tanjore Quartet” – Chinniah, Ponniah, Vadivelu and Sivanandam – and other individuals like E. Krishna Iyer.

There are three components in a Bharatanatyam performance – movements, mime and music. A typical Bharatanatyam performance includes a traditional opening prayer to Lord Ganesha known as ‘Ganapati Vandana’, which is followed by pure dance without any meaning or expression and set to the ‘thala’ (beat) known as ‘Alarippu’; a pure dance without meaning involving a complex set of footwork, ‘abhinaya’ and fascinating body movements known as ‘Jatiswaram’; an expressional dance called ‘Shabdam’; the longest and most elaborate performance with ‘jatis’ alternating with lyrical passages known as ‘Varnam’; an expressive piece called ‘Padam’ and lastly the ‘Tillana, which is the final item and comprises of pure and abstract dance. The music associated with a Bharatanatyam performance is of the Carnatic style and the accompanying instruments include thala, mridangam, nagaswaram or flute, veena and violin. The lyrics or verses are generally composed in Sanskrit, Tamil and Kannada languages.