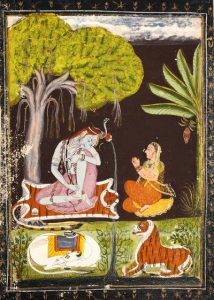 Bundi became an established centre of art and paintings in Rajasthan from 17th to 19th centuries. The Hada Rajput rulers of Bundi and their collateral branch at Kota were enlightened patrons of art. The Bundi or Hadoti School of paintings​ began under Rao Chattar Sal (1631-1659 A.D.), who was made the Governor of Delhi by Shah Jahan. The Bundi artists had their own depiction of feminine beauty. A typical Bundi-Kota miniature has graceful women with round faces, receding foreheads and shins, strong noses, full cheeks, lotus petal eyes, sharp eyebrows and well-formed bodies. The human figures were put in the backdrop of plants and evergreen forests, along with elephants, lions, tigers and wild boars.

The ‘Bhagwad Purana’ paintings are the best examples of early Bundi paintings. This style of painting evolved further under the patronage of Raja Ummed Singh (1749-1771 A.D.) and gave rise to a class of Indian paintings known as the ‘Ragamala’ and ‘Baramasa’ paintings. These paintings depict the moods and sentiments of men and women, time of the day, seasons and ‘ragas’ and ‘raginis’ linked to the seasons. A strong element of romance and mythology is integrated in these paintings. Under Bishen Singh (1771-1821 A.D.), hunting and wild animals became the favourite subjects. These paintings came under the western influence during the reign of Ram Singh (1828-1866 A.D.).