The earliest man-made caves date back to the 2nd century B.C. while the latest date to the 7th century A.D. The splendid sculpture and attractive frescoes adorning these caves make them one of the glorious monuments of India’s past.

The cave temples of Ajanta are set into a crescent shaped gorge in the Inhyadri Hills of the Sahyadri ranges and are situated north of Aurangabad. These were first mentioned in the writings of the Chinese pilgrim Hiuen Tsang who visited India during 629 A.D. and 645 A.D. The excavations for these caves spanned a period of about six centuries, and were revived during the reign of the Vakataka ruler Harishena. These were re-discovered in the contemporary times by the British officers in 1819 A.D.

Ajanta has thirty one caves, built in two phases – first one was around 2nd century B.C. and second was between 4th and 6th centuries A.D. In both phases, the art was patronized by the Hindu rulers – the Satvahanas (in the early period) and the Vakatakas (in the later period). These caves comprise of twenty four monasteries and five temples. Cave-I houses some of the most well-preserved wall paintings, which include the two great ‘Boddhisattvas’ – ‘Padmapani’ and ‘Avalokiteshvara’. The earlier monuments include both ‘chaityas’ and ‘viharas’. The sculptures contain voluptuous, decorative motifs and scenes depicting various narratives.

The series of paintings in the caves is unparalleled in the history of Indian art, both for the wide range of subjects and the medium. The murals in the Ajanta caves depict the story of Buddhism, spanning the period from 200 B.C. to 600 A.D. The early caves of Ajanta are of the Hinayana order, whereas large bodies of surviving paintings are associated with the Mahayana Buddhism belonging to 5th and 6th centuries A.D. and depict Buddhist stories called the ‘Jataka tales’. 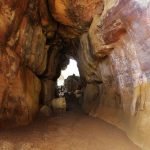 Bhimbetka, located in the Raisen District of Madhya Pradesh, was discovered in 1958 by V.S. Wakanker and is considered as the biggest prehistoric art depository in India. A total of 243 caves have been identified in this area and another 167 in Lakha Juar group. Here a large number of rock-shelters have been discovered, of which more than 130 contain paintings. Archaeological findings in some of the rock-shelters have indicated that this region has been under continuous habitation from early Stone Age (about 10,000 years) to the end of Stone Age (c.10,000 to 2,000 years) as is evident from the presence of artificially made stone tools and implements like hand-axes, cleavers, scrappers and knives. Neolithic tools like points, trapezes and lunates made of chert and chalcedony, besides decorated bone objects and pieces of ochre were also found here. 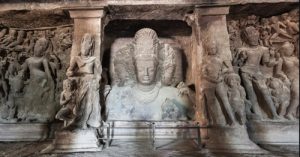 Built by the Chalukya rulers, the Elephanta Island (known as ‘Gharapuri’ in the earlier days) consists of two groups of caves – the first is a large group of five Hindu caves and the second, a smaller group of two Buddhist caves.

The 6th century Shiva temple in the Elephanta caves is one of the most exquisitely carved temples in India. The central attraction here is a twenty-foot high bust of the deity (‘Maheshmurti’) which is built deep into a recess and looms up from the darkness to fill the full height of the cave. This image symbolizes the fierce, feminine and meditative aspects of the great ascetic and the three heads represent Lord Shiva as ‘Aghori’, ‘Ardhanarishvara’ and ‘Mahayogi’. Aghori is the aggressive form of Shiva where he is intent on destruction. Ardhanarishvara depicts Lord Shiva as half-man/half-woman signifying the essential unity of the sexes. The Mahayogi posture symbolises the meditative aspect of the God and here Lord Shiva is shown in his most quiet and serene form. Other sculptures in these caves depict Shiva’s cosmic dance of primordial creation and destruction and his marriage to Parvati. 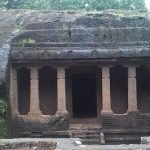 The Mahakali Caves, also Kondivite Caves, are a group of 19 rock-cut Buddhist caves situated in the Udayagiri hills, about 6.5km from Mumbai. These were excavated during 200 B.C. to 600 A.D. and are now in ruins. They comprise of 4 caves on the southeastern face and 15 caves on the northwestern face. Most caves are viharas and cells for monks, but Cave 9 of south-eastern group is chaitya. Cave 9 is the chief cave and is the oldest and consists of a stupa and figures of Lord Buddha. The caves are carved out of a solid black basalt rock. 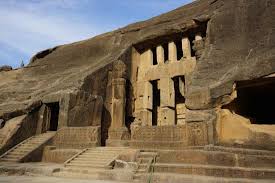 Located in the western suburbs of Mumbai, the Jogeshwari Cave is the second largest known cave after the Kailasa Cave in Ellora. It was created around 1500 years ago and houses a Shiva temple dating back to the 6th century A.D. It is estimated that Jogeshwari was created about 520-525 A.D., a few decades after work had stopped at Ajanta and a few decades before Elephanta.

Excavated between the 1st and 2nd centuries A.D., the Kanheri is a 109-cave complex located near Borivili National Park in Mumbai. The Kanheri caves contain illustrations from the Hinayana and Mahayana Buddhism and show carvings dating back to 200 B.C. The most striking of all the caves is Cave No. 3 (2nd century A.D.), whose entrance is flanked by two huge statues of Buddha carved in the 6th century A.D.

The Karla Caves are located in Karli near Lonavala, Maharashtra, and lie in the Western Ghats. The Karla Caves constitute a complex of ancient Buddhist rock-cut cave shrines developed over two periods – the earlier period from 2nd century B.C to 2nd century A.D. and later period from 5th-10th century A.D. The oldest cave is believed to date back to 160 B.C. The principal cave is the largest Chaitya among the Buddhist caves in the country, being 15 metres wide and 16 metres high. The most remarkable feature of the cave is its arched roof supported by wooden beams which have survived the onslaught of elements for more than 2,000 years. At the entrance of the principal cave is the temple of Goddess Ekvira, which is visited by thousands of devotees.

Bhaja is one of the important Buddhist centres of the Hinayana faith in Maharashtra. The group consists of twenty two rock-cut caves and located on a hill near Bhaja village, Maval Taluka in Pune. All the caves belong to the Hinayana phase and are datable from 3rd century B.C. to 2nd century A.D. The excavations here consist of ‘chaitya-grihas’, ‘viharas’ and ‘podhis’. The most prominent among the excavations is the ‘chaitya-griha’, which is considered to be the earliest of its kind and a close copy of wooden proto type. It consists of a large apsidal hall measuring 17.08 metres is length and 8.13 metres in width. A stupa is placed at the back measuring 3.45 metres in diameter for worship, which has a prominent hemispherical dome crowned by a railing pattern (‘harmika’) and provision of a hole in the top for inserting a wooden umbrella.