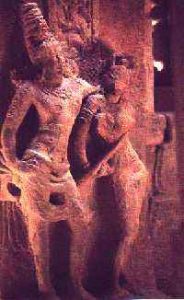 The Chalukyan rulers (c.450 A.D. to c.650 A.D.) constructed several stone temples at Aihole, which are mostly Hindu but a few are Jain. The Aihole temples had flat or slightly sloping roofs and were surmounted by a small ‘shikhara’. A pillared assembly hall or ‘mandapa’ was added later to these structures, indicating a further evolution of the temple architecture. The Chalukyan architecture is a juxtaposition of the Indo-Aryan and Dravidian styles of temple architecture, and is sometimes referred as the ‘Vesara’ style of architecture. The Ladh Khan and Durga temples at Aihole are the best examples of the Chalukyan architecture. The Chalukyas constructed four rock-cut pillared halls in the later half of the 6th century A.D. at Badami, three of which are Hindu and one is Jain. During the Chalukyan period, the rock-cut method of architecture was slowly superseded by the use of stone masonry.

The temples of Pattadakal (7th century A.D.) represent the final phase of the Chalukyan Art. Vijayaditya (696-733 A.D.) and Vikramaditya II (733-746 A.D.) were instrumental in perfecting the style of architecture of the Pattadakal temples. Of the ten major temples at Pattadakal, six follow the Dravidian style (Sangameshwar, Virupaksha, Mallikarjuna, Galagnath and Sunmeshwar Temples and the Jain Temple) and four follow the Indo-Aryan style (Papanath Temple, Jambulinga Temple, Karsedeshvar and Kasinath temples).