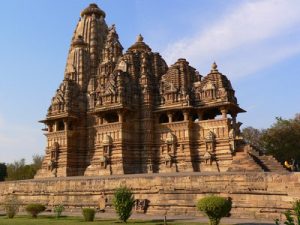 The Chandelas of Jijihoti (Bundelkhand) were known as great builders during the 10th -11th centuries A.D. During 950-1050 A.D. they built the Khajuraho temples, which are regarded as one of world’s greatest artistic wonders.

There are three main compartments in each temple, ‘garbha griha’ or ‘cella’, ‘mandapa’ (an assembly hall) and ‘ardha mandapa’ (entrance portico). Some temples may also contain the ‘antarala’ or vestibule to the ‘garbha griha’ and the transepts or ‘maha-mandapa’. The ‘Kendriya Mahadev Temple’ is the largest and the most striking of the Khajuraho Temples. The other important temples at Khajuraho include the ‘Shiva Temple’ at Visvanath and the ‘Vishnu Temple’ at Chaturbhanj.