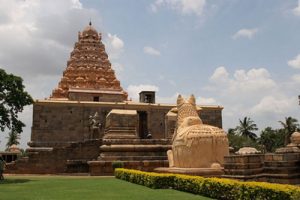 ​The Chola Art can be considered as a continuation of the Pallava Art. The Cholas built hundreds of temples, the earlier examples of which were modest in size while the later ones were huge with the ‘Vimanas’ or ‘gopuras’ dominating the landscape. The temple of Koranganatha at Srinivasanalur in the Tiruchirappalli district of Tamil Nadu, built during the reign of Parantaka I (907-949 A.D.) is one of the earliest examples of the Chola architecture. The Chola architecture achieved its peak at Thanjavur, the capital established by the Chola ruler Rajaraja I. The ‘Brihadeshwara Temple’ at Thanjavur, erected around 1000 A.D., has been described as “the most beautiful specimen of Tamil architecture”. In the words of Percy Brown the temple was “apparently the largest, highest and most ambitious production of its kind hitherto undertaken by Indian builders, it is a landmark in the evolution of building art in southern India”. The 55 metres long main structure of the temple had a 58 metres feet tall pyramidal tower or ‘shikhara’.

The temples at Thanjavur, Chidambaram, Sri Rangam, Gangaikonda-Cholapuram, Darasuram and Tribhuvanam amply illustrate the style of architecture that characterised the monuments in southern India between the 11th-13th centuries. The Chola style of architecture also had considerable influence on the architecture of the Hindu temples of Ceylon (Sri Lanka) and those of the Southeast Asian kingdoms like ‘Sri Vijaya’ (Sumatra) and ‘Chavakam’ (Java).