‘Tata Vadya’ or Chordophones or the stringed instruments are of three varieties: (a) Bowed: Here the sound is produced by drawing a bow across the strings, e.g. Sarangi and Violin (b) Plectral: Here the strings are plucked by fingers or by a plectrum of wire or horn e.g. Veena and Sitar and (c) Instruments which are struck by a small hammer or pair of sticks e.g. Gotuvadyam and Swarmandal. Other ‘Tata Vadyas’ include Rudraveena, Sarod, Santoor, Surbahar, Tanpura, Dilruba, Esraj, Ektara, Kamaicha, Ravan Hatha, Mayuri, Tarshehnai, Gopichand, Rabab, Banjo, Tambi and Tuntuna. 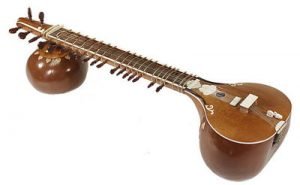 The word ‘Sitar’ is derived from the Persian word ‘sehtar’ where ‘se’ means ‘six’ and ‘tar’ means ‘string’. Sitar has been in use for over 700 years. It is, perhaps, the most popular stringed instrument in India. It is mainly used for solo performances and is also played with Sarod in ‘jugalbandi’. The origin of Sitar goes back to the ancient Veena. In the 13th century A.D., Amir Khusro reversed the order of the strings and made the frets moveable in order to make the instrument more flexible. Pandit Ravi Shankar brought about several changes and gave a new perspective to Sitar. The popular gharanas of sitar include the ‘Jaipur’, ‘Varanasi’, ‘Lucknow’, ‘Indore’ and ‘Etawah’ (‘Imdad Khani’) gharanas, besides the ‘Maihar Sitar’ and ‘Darbhanga Sitar’gharanas. 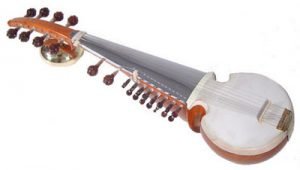 Sarod is a fretless lute, with a fingerboard faced with metal. It has 8-10 main playing strings and 11-16 sympathetic strings. It is played in accompaniment with the tabla though previously the Pakhawaj was used. The present form of Sarod was developed about 200-250 years ago in India, as adaptations of ‘Rabab’, ‘Sursringar’ and ‘Veena’. The Rabab (‘Seni Rabab’) was already in use in India in the 16th century during the reign of Akbar. This instrument was later modified by Jafar Khan, one of the descendants of Tansen, which came to be known as ‘Sursringar’. It became the forerunner of Sarod. Afghanistan’s Pathan Bangash family represented by Ghulam Bandegi Khan Bangash and his son Ghulam Ali Khan Bangash contributed greatly to the evolution of the present day Sarod. Ustad Ali Akbar Khan made a definite change in the shape of the instrument for improving its tonal quality. 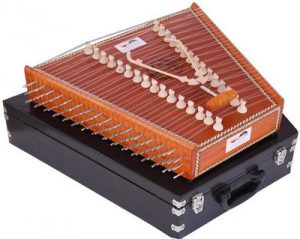 Santoor is a stringed instrument, which can be considered as the eastern relative of the hammered dulcimer of Europe. The Vedic ‘shata tantri’ veena, also known as ‘Vana veena’, which had hundred strings and was played with sticks, is the possible precursor of Santoor. This was associated with the religious singing of the ‘Shaivaites’ in the 12th century A.D. Santoor has been popularly used in Kashmir as an accompaniment to the Sufi music. It was traditionally played with the ‘wasul’, a Pakhawaj-like instrument. Today, it is played solo, with tabla or Pakhawaj as accompaniment. Santoor is a versatile instrument, which can even produce complicated musical embellishments like the ‘gamaka’ and ‘meend’.

Shivkumar Sharma, Bhajan Sopori and Tarun Bhattacharya are among the leading exponents of Santoor. 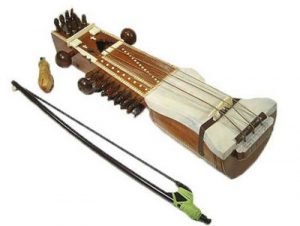 The name derives from ‘Sau Rangi’ meaning ‘hundred colours’. Sarangi has four main strings and upto forty resonant strings and is played with a bow. The Sarangi was the premier musical instrument of the North Indian music during the mid-17th century but it gradually declined in its importance as it became identified with the ‘mehfils’ and ‘tawaifs’ (Nautch girls). Today, Sarangi is largely replaced by harmonium and faces oblivion.

The origin of Sarangi is not clear and no authentic account of its development is available. The ancient fret-less musical instrument called ‘Ghosvati’ or ‘Ghoshak Veena’ perhaps bears the closest resemblance to the later day Sarangi in terms of shape and structure. In more modern parlance, the ‘Pinaki Veena’, a gut-string bowing instrument described in Sarang Deva’s ‘Sangeet Ratnakar’ (13th century A.D.) bears close resemblance to the modern Sarangi.

Many instruments akin to Sarangi have been in vogue in different parts of India such as the ‘Ravana Hatha’ in Western India, ‘Kingri’ in Maharashtra and Andhra Pradesh, ‘Kunju’ in Kerala, ‘Pen’ in Manipur, ‘Kamayanch’ in Rajasthan and ‘Banam’ and ‘Kenara’ in Orissa. Its other variations are ‘Saran’ in Jammu and Kashmir, the ‘Sindhi Sarangi’ and ‘Jogia Sarangi’ of Rajasthan, ‘srimandal’, ‘Gujaratan Sarangi’ and ‘Alabu Sarangi’. 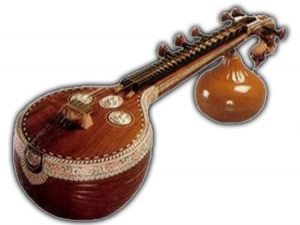 Veena is one of the most ancient and revered instruments in the Indian music. It was in use during the Vedic times and finds mention in the ancient religious texts as the divine instrument of ‘Saraswati’, the ‘Goddess of Learning’. In the ‘Ashvamedha’ sacrifice, veena was the primary musical instrument that accompanied the Vedic chants. The instrument was first depicted in the 6th century A.D.; however, there are references in texts to a bottle gourd Veena, as far back as 500 B.C. This instrument has dominated the Indian music scene for nearly two thousand years.  Ancient treatises on music such as Narada’s Sangeetamakaranda and Bharata’s Natya Shastra describe various kinds of Veenas. Tansen developed the Rabab (Rudra-Veena) and the Hindusthani Saraswati Veena. Tansen, along with his youngest son Bilas Khan, his son-in-law Misri Singhji and Nirmul Shah were renowned Veena players.

Veena has twenty four fixed frets on a hollow wooden fingerboard, which is attached to two gourds. Its strings can produce the most delicate nuances and are plucked with either one or two fingers. The Veena is played as a solo instrument accompanied by ‘mridangam’ and sometimes flute. Many recent instruments like sitar and tanpura owe their origin to veena. Many kinds of Veenas exist like the ‘Carnatic Veena’, ‘Vichitra veena’, ‘Mahaveena’, ‘Saraswati Veena’, and ‘Rudra Veena’ (‘been’), which mainly differ in their size and number of strings. Because of its antiquity, veena is used both in the Hindustani and Carnatic music.  In South India, the Saraswati veena is popular, while in the North the Rudra veena is used more often. Sursringara is another musical instrument, similar to Veena, which was invented by Jaffar Khan.

Rudra Veena or the Bin was extremely important in Indian musical society in the past. The Been, which is the Veena of the North Indian music is the oldest of indigenous instruments, is still used in classical music. The present day Been which crystallized in the 16th-18th centuries, features a hollow wooden tube to which is attached 24 high frets. Most Beens have 7 or 8 strings, four of which are fretted, and 3 or 4 strings are used as open drones. Typically the Been is 5 to 8 tones lower than its younger sister the Sitar. Wazir Khan of Rampur gave recognition to the Been as a concert instrument in the early 20th century.

The Carnatic Veena is the principal instrument used in the performance of South Indian music. It is directly related to the Rudra Veena, but underwent structural changes in the 16th Century. The Carnatic Veena originally had the tube with two-gourd design, but musicians introduced a series of refinements. It has 4 main playing strings and 3 drones. There are 24 metal frets.

Vichitra Veena, which is similar to the rudra veena, is a comparatively recent addition to the Veena family, having evolved only in the 19th Century A.D. It is a fretless stringed instrument with four main strings, three drone and rhythm strings and eleven to thirteen resonating strings. The strings are plucked by a plectrum on the index or middle finger of the right hand. It is played by rolling a ball along the strings. Because of the absence of frets, one can play perfect meends (glissandos) on an octave and a half, something difficult to perform on a Been, and so get closer to the abilities of the human voice. Its actual shape has been claimed by a Patiala Gharana musician, Abdul Aziz Khan. Maestros: Gopal Krishnan is currently the leading performer on the instrument. Dr Mustafa Raza is an up-coming artist of Vichitra Veena.

The Sarasota Veena is the string instrument of Carnatic music. It is the last survivor of many types of Veenas created in South India. Its form has been fixed definitely at the end of 19th century AD and it has progressively replaced all the other Veenas.

​Violin is an important stringed instrument used both in the Hindustani and Carnatic music. It was brought to India in the 18th century A.D. by the Europeans. The credit for adapting it into the Carnatic music goes to Balaswami Dikshitar. Although violin is of Western origin, it has become an integral part of the Indian music owing to its ability to produce the ‘gamakas’ and other embellishments peculiar to Indian music. Although the violin is played solo in the Carnatic and Hindustani music, its primary role in the Carnatic music is as an accompaniment to vocal performances. V. G. Jog, L. Subramanium, Dr N. Rajam, Prof. T.N. Krishnan, Lalgudi G. Jayaraman, V.V. Subrahmanyam, Papa Venkataramaiah and Dr L. Subrahmanyam are some of the leading exponents of violin. 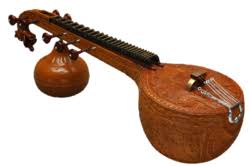 ​The ‘gottuvadhyam’, more correctly called ‘Chitra Veena’, is a complicated ancient fretless instrument with twenty-one strings. Earlier the instrument was played only during mourning but now it is also played on other occasions. Ravi Kiran is a leading exponent of the instrument. 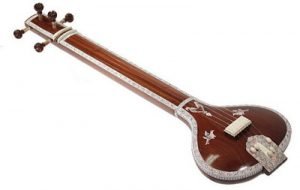 Tanpura (‘tambura’) is an important instrument in Indian classical music that provides an accompaniment to classical vocal and instrumental concerts. It is a four or five-stringed instrument, which provides a continuous drone, a reference pitch for the singer or instrumentalist to follow. The tanpura is believed to have been brought into India from Persia where it was called ‘tambur’. The Hindu mythological texts credit Narada for the creation of tanpura. 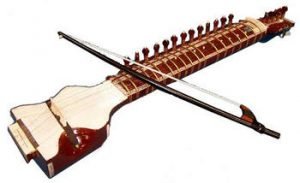 Dilruba/Esraj are one of the most widespread of bowed stringed instruments in use in India, in classical, religious, folk and popular music. While, ‘Dilruba’ is found in the north, ‘Esraj’ is found in the east and central areas, chiefly in West Bengal.

The Esraj was a favourite instrument of Rabindranath Tagore, who employed it in his songs. 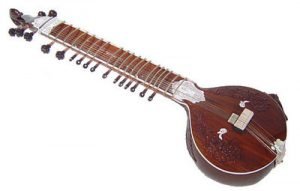 Surbahar (‘bass sitar’) has four rhythm strings, four play strings and fifteen to seventeen un-played sympathetic strings. Some researchers believe that surbahar was invented around 1825 A.D. It is believed that Surbahar was invented by Omrao Khan, nephew of Nirmal Shah, the legendary Veena player. Imrat Hussain Khan and Jadabendra Mahapatra are renowned names among Surbahar players.