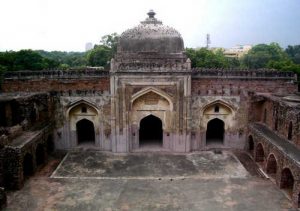 The earliest construction work of this period was started by Qutubuddin Aibak, who started erecting monumental buildings of stone on ‘Qila Rai Pithora’, the first of the seven historical cities of Delhi associated with Prithviraj Chauhan. The Qutub Mosque (1192 A.D.) is one such building, whose arcaded aisles were composed of pillars carved in the Hindu style. Named as the ‘Quwwat-ul-Islam Masjid’, it is considered as the earliest mosque in northern India. The mosque has beautiful Islamic calligraphy, the arabesque designs and pillars with pre-Islamic Hindu motifs. Aibak got a series of arches constructed to screen the Hindu pillars of the sanctuary. Qutubuddin Aibak also started the construction of the Qutub Minar in 1192, which was eventually completed by Iltutmish in 1230. The Qutub Minar was essentially a victory tower, decorated with several calligraphic inscriptions. The diameter of the Qutub Minar is 14.32 metres at the base and about 2.75 metres at the top. It has a height of 72.5 metres and contains a spiral staircase of 379 steps. Another interesting monument constructed during this time was the ‘Adhai-din-ka-Jhopra’, located beyond the Ajmer ‘dargah’ in Rajasthan. It was constructed in 1153 A.D. and converted into a mosque in 1198 A.D.

Shamsuddin Iltutmish (1211-1236 A.D.) was another great builder of the Slave dynasty. He extended the Quwwat-ul-Islam Masjid (1229 A.D.) and built the tomb of his son Nasiruddin Mohammed in 1231 A.D., which is locally known as “Sultan Ghari”. He also started his own tomb (‘Iltutmish’s Tomb’) located in the Qutub Minar complex in 1235 A.D. Iltutmish is also credited with constructing two lesser-known monuments near Delhi called the ‘Hauz-i-Shamsi’ and the ‘Shamsi-Idgah’. The tomb of Balban constructed in 1280 A.D. represents the first true arch built in India, which is produced by following the scientific system originally formulated by the Roman engineers.

Allauddin Khilji, who established the second city of Delhi at Siri, built the ‘Alai Darwaza’ near the Qutub Minar and dug a vast reservoir at Hauz Khas around 1311 A.D. The well-decorated ‘Alai Darwaza’, which served as an entrance gateway to the mosque at the Qutub complex, marks the evolution of another innovative feature in the Indo-Islamic architecture.

The rulers of the Tughlaq Dynasty also undertook considerable construction activities, including building three of the seven ancient cities of Delhi. 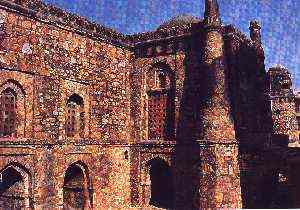 Ghiyasuddin Tughlaq (1320-1325 A.D.) built Tughlaqabad, the third city of Delhi, in 1321-23 A.D. The Tomb of Ghiyasuddin Tughlaq, built of red sandstone, is an irregular pentagon in its exterior plan and its design is of pointed or “Tartar” shape and is crowned by a finial resembling the ‘kalasa’ and ‘amla’ of a Hindu temple. Delhi’s fourth city Jahanpanah was built by Mohammad-bin-Tughlaq in mid-14th century. Firoz Shah Tughlaq (1351-1388 A.D.) was undoubtedly the greatest builder among all the rulers of the Tughlaq dynasty. He himself wrote in ‘Fatuhat-i-Firoz Shah’ “among the gifts which God bestowed on me, His humble servant was a desire to erect public buildings” . He built Ferozabad, Delhi’s fifth city, in 1354 A.D. The famous Firoz Shah Kotla ground is the only remnant of its past glory. Firoz Shah Tughlaq is also credited with founding the fortified cities of Jaunpur, Fathabad and Hissar. His construction works were of a unique simple style characterised by the use of inexpensive materials. The medieval rulers, who were used to the convenience of choosing new locations for starting new constructions, rarely adopted restoration of previous buildings. It was only Firoz Shah Tughlaq who took up large-scale restoration work and repaired hundreds of monuments, including the Qutub Minar which was damaged by lightening in 1369 A.D. The ‘Kali Masjid’ (c.1370 A.D.), ‘Khirki Masjid’ (c.1375 A.D.) and the ‘Kalan Masjid’ (c.1375 A.D.) also belong to this period, the last two being raised on a ‘tahkhana’ or substructure of arches.

In the 14th century under the Timurid rulers, Islamic architecture underwent a change. The true arch, an idea imported directly from Persia, replaced the narrow horseshoe arch. However, Indian masons weren’t completely convinced of its holding power. They began using wooden beams as supports, and eventually the four-centred arch minus the beam support came into vogue. During the Sayyid and the Lodi Dynasties, more than fifty tombs of different sizes were constructed. The Lodis introduced the concept of double domes built one upon the other, leaving some space in between. Two different types of tombs with octagonal and square plans respectively began to be constructed. The Tombs of Mubarak Sayyid, Muhammad Sayyid and Sikander Lodi are all of the octagonal type. The square tombs are represented by such monuments as the ‘Bara Khan Ka Gumbad’, ‘Chota Khan Ka Gumbad’, ‘Bara Gumbad’ and ‘Dadi Ka Gumbad’. The ‘Tomb of Isa Khan’ (1547 A.D.), ‘Tomb of Adham Khan’ (1561 A.D.), ‘Moth Ki Masjid’ (c.1505 A.D.) and the ‘Qila-i-Kuhna Masjid’ (c.1550 A.D.) belong to the final phase of the Delhi architecture.