Three big banners emerged on the scene of the Indian cinema in the thirties, which became pioneers in producing serious films on gripping social themes aimed at all classes of the cinema audience. These were ‘Prabhat’, ‘Bombay Talkies’ and ‘New Theatres’. The studio system emerged in the early 1930s and was first used in P.C. Barua’s Bengali film ‘Devdas’ (1935), whose Hindi re-make established the legendary career of Kundanlal Saigal.

A number of films of this period like ‘Duniya Na Mane’, ‘Aadmi’ and ‘Padosi’ produced by V.Santharam, ‘Watan’, ‘Ek hi Raasta’ and ‘Aurat’ produced by Mehboob and Franz Osten’s ‘Achut Kanya’ made a strong plea against social injustices. India’s first colour film was Prabhat’s ‘Sairandhri’, which was processed and printed in Germany in 1933. Ardashir Irani’s ‘Kisan Kanya’ made in 1937 was the first indigenously made colour film in India. 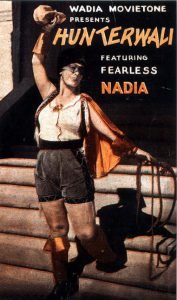 JBH Wadia and Homi Wadia were the pioneers of the stunt films in India. They made a number of films like ‘Hunterwali’ (1935), ‘Toofan Mail’, ‘Flying Ranee’ and ‘Punjab Mail’, which featured the Australian actress Mary Evans as the stunt actress, who earned the nick-name “Fearless Nadia”. JBH Wadia’s ‘Naujawan’ made in 1937 was the first film without songs. The first Hindi film to be made in South India was ‘Premsagar’ (1939) produced and directed by K.Subrahmanyam. Devika Rani was the top heroine of the 1930s and starred in movies like ‘Kara’ and ‘A Throw of Dice’. Durga Khote, Nadia, Jamuna, Padma Devi and Kanan Devi were the other leading heroines of the period, while Prithviraj Kapoor, K.L.Saigal, Ashok Kumar and P.C.Barua were the top male leads.

The 1940s was a turbulent decade; the first half was ravaged by war and the second saw extreme political changes all 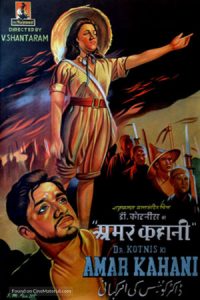 over the world. V. Shantaram, the doyen of lyrical films, made films like ‘Dr. Kotnis Ki Amar Kahani’, ‘Padosi’, ‘Do Aankhen Barah Haath’, ‘Pinjra’, ‘Jhanak Jhanak Payal Baaje’ and ‘Geet Gaya Pattharon Ne’. Several memorable films were produced in the forties like ‘Dharti Ke Lal’ produced by Abbas; ‘Sikander’ and ‘Pukar’ made by Sohrab Modi; ‘Laila Majnu’ made by S.Nazir; ‘Bandhan’ made by Acharya; ‘Aurat’ produced by Mehboob; ‘Neecha Nagar’ made by Chetan Anand; ‘Chitralekha’ made by Kidar Sharma; ‘Chandralekha’ produced by S.S. Vasan and Kamal Amrohi’s ‘Mahal’. Veteran modern dancer Uday Shankar produced his only film ‘Kalpana’ in 1948, which was based entirely on dance numbers. Sohrab Modi’s ‘Jhansi Ki Rani’ (1953) was the first film in technicolour.

The fifties brought onto the scene the famous trinity – Dilip Kumar, Raj Kapoor and Dev Anand – each of whom developed their own image and huge fan followings. The RK Films was launched in 1948 with ‘Aag’. The Central Board of Film Censors was set up in the same year. 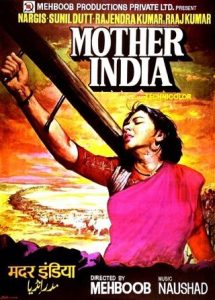 In 1952, the first International Film Festival of India was held in Bombay, which had great impact on the Indian Cinema. In 1953 ‘Do Bigha Zameen’ produced by Bimal Roy won an award at the Cannes. In 1954 the first National film awards were given to the feature film ‘Shyamchi Aai’ and Jagat Murari’s short film ‘Mahabalipuram’. In 1955, Satyajit Ray’s ‘Pather Panchali’ won the Cannes award along with several other foreign and national awards. In 1957 ‘Mother India’ won an Oscar nomination under the best foreign language film. In the same year K.A.Abbas produced ‘Pardesi’ as the first Indo-Soviet co-production. The first film in cinema scope was Guru Dutt’s ‘Kagaz Ke Phool’ (1958). The first documentary film festival was also organised in Bombay during 1958. Sohrab Modi’s ‘Mirza Ghalib’ (1954) was the first Hindi film to get the President’s Gold Medal. The first Hindi film to have location work done abroad, in London and Cairo, was S.K.Ojha’s ‘Naaz’ (1954).