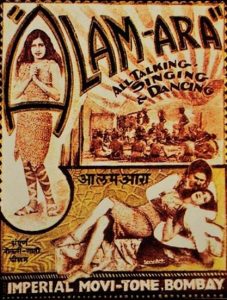 The first Indian talkie ‘Alam Ara’ was directed by Ardershir Irani and produced by the Imperial film company. It was released on March 14, 1931 at the Majestic Cinema in Bombay. W.M. Khan, who sang ‘De de Khuda kai naam pe’ in ‘Alam Ara’, was Indian cinema’s first singer and the song was the first ever recorded song of the industry. Number of songs in films began to increase gradually till it reached a gigantic seventy one in ‘Indrasabha’, making film songs a Pan-Indian phenomenon. ‘Ghar Ki Lakshmi’ (1931) was the second talkie film to be produced in the country, which was followed in the same year by an improvised talkie film in the form of Madan Theatre’s ‘Shirin Farhad’.

The talkie films brought a revolution to the Indian film industry and completely over-shadowed the silent movies at a time when they were at a peak, leading ultimately to their disappearance. The talkies also faced lot of technical glitches in the initial stages as there were no dialogue writers or lyricists and songs had to be sung during filming as pre-recording facilities were not known. The use of musical instruments was minimal and the musicians had to be camouflaged behind the singer. But the talkie films had come to stay. The talkies helped in bringing about social awareness by focussing on themes like women’s liberation and the practice of arranged marriages.