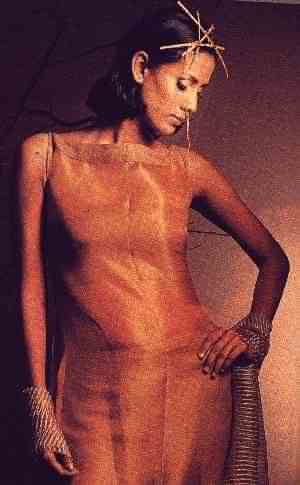 In Indian culture, the body is invested with various meanings. This is reflected in its rich sculptural tradition where a language of poses as well as hand and leg positions developed to convey specific messages. Decorating the body is yet another way of conveying meaning. Throughout Indian history, the kinds of costumes and accessories worn can be seen to fulfill two criteria: simplicity and opulence. In either instance, the choice of clothing is dependent on the person’s status, wealth and religious orientation. Information about fashion in ancient India is available only from looking at sculptures as very few examples of costumes, textiles and jewellery have survived. In the Indus Valley Civilisation (c. 3000-1500 BC), clothing tended to be simple. Men wore loin-clothes while women were bare to the waist. Status was reflected in the kind of jewellery worn; high-ranking women sometimes covered their bosoms with jewels. It was only with the coming of the Aryans to India that more complicated clothing consisting of the upper and lower garments was introduced, to which a cloak was added later. These were generally pieces of cloth draped over the body in a style seen in many Indian costumes today.

Ancient works like the Amarakosha and the Brihat-kalpa-sutra mention a range of subjects including textiles and garments. The range of sculptures and paintings at Ajanta give a clear idea of the colours and patterns of garments, apart from the manner in which these were worn. Several terms for the female upper garment were used in Sanskrit and Prakrit literature including uttarasanga, uttariyavasan uttariyavasa, udaramsbuka, samvyana, stanamsbuka and stanottariya. There are also numerous references in literature to stitched blouses or jackets, the various names used for them including kancbuka, kanchulika, kurpasa and kurpasaka.

The lower garment worn by women were also described by a variety of names like ambara, amsbuka, antariya, jaghanamsbuka, nivasana, paridbana, vasana, vastram, vasas and sauli. Texts of the 7th century mention not only the tailor (tunnavaya or suchaka) but also his implements like the needle (sucbi), sewing thread (sucbi sutra), and the scissors (katiati). The Sakas and Kushans were the first to introduced turban, tunic, trousers and heavy long coats to Indian costumes.

The total range of costumes in India is considerably expanded between the 8th and the 12th centuries. Interesting and useful accounts of geographers and chroniclers, especially those of Arab and Chinese origin throw light on the Indian costumes in vogue at different times in history. In their accounts, Masudi, Idrisi and Ibn Hawqal speak of Indian cotton with a sense of wonder and awe. With the arrival of the Mughals in the 16th century, new garments like qaba, jama, piraban, lilucba, liba, kasaba, and the like began to be used. These kinds of costumes are also found illustrated in the historical works like the Babar nama, the Tawatlkb-i-kbandan-i-Taimuriya and the Tarikb-i-fi.

Abu’l Fazl provides probably the best documentation that we have of the costumes of India from any single source prior to the 19th century. He mentions that Akbar had replaced the names of several garments with new and pleasing terms. His Ain-i-Akbari mentions that designers from Europe and the Middle East used to frequent the Mughal courts. Muslin from undivided India was an important commodity of export and a high fashion fabric in Europe and other parts of the world.

Indian costumes like the silk saris, brightly mirrored cholis, colorful lehangas and the traditional salwar-kameez have fascinated many a traveller over the centuries. Although sari is only one of the many traditional garments worn by women, yet it has become the national dress of Indian women. The tightly fitted, short blouse worn under a sari is a choli, which evolved as a form of clothing in 10th century AD. Apart from the choli, women in Rajasthan wear a form of pleated skirt known as the ghagra or lehanga. Though the majority of Indian women wear traditional costumes, the men in India can be found in more conventional western clothing. Shirts and trousers are worn by men from all the regions of India. However, men in villages wear traditional attires like kurtas, lungis, dhotis and pyjamas.

Indian dressing styles are marked by many variations, both religious and regional and one is likely to witness a plethora of colors, textures and styles in 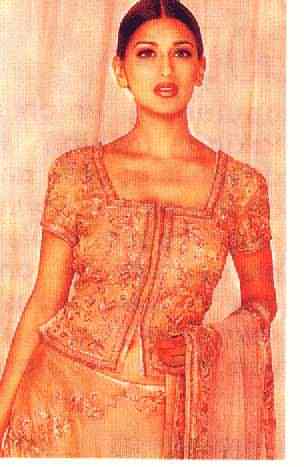 garments worn by the Indians. Apart from this, the rich tradition of Indian embroidery has long been made use of by fashion designers from other countries. India prides in works like Zardozi, Dabka, brocades, Pashmina, Jamawar and bandhni. It seems paradoxical that fashion is considered a young concept in India since the first fashion show was held only in 1958. Jeannie Naoroji wins the credit for initiating the first wave of fashion shows in India and for giving a degree of professionalism to such shows.

Since then, there has been growing consciousness among the Indian men and women towards the fashion, styles and designs of the dresses they wear. Several institutes like National Institute of Fashion Technology (NIFT), Indian Institute of Fashion Technology (IIFT) and other fashion academies have been established where the students are taught to translate their creativity into dresses and fabric designs. The media has also played an important role in the fashion boom. Good coverage is provided to the fashion world and several magazines are specifically devoted only to the fashion scene. The proliferation of fashion-based programmes on the satellite television channels has increased the consciousness of the average Indian masses about the changing trends in the global fashion.

Now more and more leading fashion designers like Ritu Beri, Rina Dhaka and others are concentrating on Indian wear and trying to revive India’s glorious fabric and design traditions. As the best of designs, motifs, themes and skilled craftsmen are available in India and Indian fabrics and styles are best suited for the country, such efforts seem quite logical. As a result we find more and more men and women adopting the swadeshi clothes and designs. The Sherwanis, Jodhpuris, Nehru jackets, shawls and Kurta-pyjamas have all sprang back as the “latest designer-wear” among men. Similar revival is evident in women’s costumes. Several Indian designers are also launching ranges that are easy on the pocket of ordinary masses. The Indian designers are also found to take up social themes like the cause of environment in their designer wear.

Today the fashion designers from India have created a lasting impression on the world market and boast of clients in the Middle East, UK and USA. Ravi Bajaj has designed various fashion lines for export houses targeting the US and European markets. Ritu Beri has an outlet at the prestigious Regent Street in London and in New Jersey in U.S.A. Indian designers like Gitanjali Kashyap, Rohit Bal and others frequently participate in fashion shows abroad. Interestingly an Indian shawl and a salwar-kameez ensemble, created by leading Mumbai couturiers Abu Jani and Sandeep Khosla, fomed part of the exotic wardrobe of French actress Sophie Marceau in the latest James Bond adventure “The World Is Not Enough”, which was released earlier this year.