The National Film Awards are considered as the most prestigious awards for cinema in India. It began in 1954 and is currently managed by the Directorate of Film Festivals. The awards are given in the categories of Feature Films and Non-Feature Films made in Hindi and other regional languages. The awards are selected by members of independent juries for films produced in the previous year as per the National Film Award Regulations. The award ceremony is held in New Delhi during which the awards are given away by the President of India. A National Film Festival is organised after the ceremony, where the award-winning films are screened for the public.

The ‘Swarna Kamal’ or the ‘Golden Lotus Award’ is given for the following categories: Best Feature Film, Best Direction, Best Popular Film providing wholesome entertainment, Best Children’s Film and the Indira Gandhi Award for Best First Film of a Director, while the ‘Rajat Kamal’ or the ‘Silver Lotus Award’ is inter alia given for Best Actor and Actress, Best Art Direction, Best Supporting Actor and Actress, Best Costume Design, Best Playback Singers and Best Choreography, besides the Nargis Dutt Award for Best Feature Film on National Integration and Best Films on family welfare, environment conservation and other social issues.

​The Dadasaheb Phalke Award was instituted in 1969 and is considered as the Government of India’s highest national honour for cinema. Named after the veteran film actor Dada Saheb Phalke, the Award is presented every year to senior film personalities for their overall contribution to cinema and the arts. It carries a “Swarna Kamal” and a cash prize of Rs. 10 lakh (Rs. 1 million). 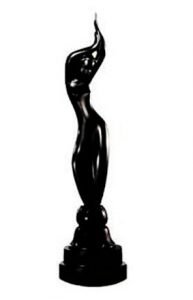 ​The Filmfare Awards, which were introduced in 1954, are one of the oldest and most prominent film awards. These awards were initially referred to as the Clare Awards after the editor of The Times of India, Clare Mendionca. The awards are presented annually by The Times Group to honour artistic and technical excellence of professionals in the Hindi cinema.