The Gandhi Peace Prize was instituted by the Government of India on October 2, 1995 to coincide with the 125th birth anniversary of Mahatma Gandhi. The objective of this annual award is to promote and encourage Gandhian values world-wide. The award is given to individuals and institutions for their contribution in initiating socio-economic and political transformation through non-violence and other Gandhian methods. The award carries a cash prize of Rs. 1 crore (Rs 10 million) convertible in any currency in the world, a plaque and a citation as well as an exquisite traditional handicraft/handloom item. 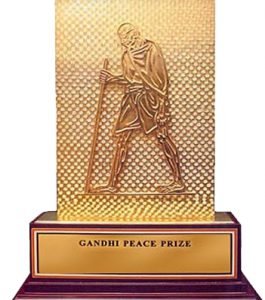 The awardees are decided by a five-member jury headed by the Prime Minister and comprising of the Leader of the Opposition in the Lok Sabha, the Chief Justice of India and two other eminent persons. The awards are managed by the Ministry of Culture. The jury considers such proposals as have been received by the office of the Ministry of Culture up to April 30 of that year for which the Gandhi Peace Prize is to be given.

Only achievements within 10 years immediately preceding the nomination are considered for the award; an older work may, however, be considered if its significance has not become apparent until recently. A written work, to be eligible for consideration for the Gandhi Peace Prize, should have been published

i) Vivekananda Kendra, Kanyakumari for the year 2015 for their contribution in Rural Development, Education , Development of natural resources.

iii) EkalAbhiyan Trust for the year 2017 for their contribution in providing Education for Rural and Tribal Children in remote areas pan India, Rural Empowerment, Gender and Social Equality

iv) Shri YoheiSasakawa for the year 2018 for his contribution in Leprosy Eradication in India and across the world.