The first play published in Gujarati was Laxmi Natak by Dalpatram in 1850, it was inspired by ancient Greek comedy Plutus by Aristophanes. The Parsi dramatic companies laid the foundation for the modern Gujarati and Urdu theatre in mid-1850s. 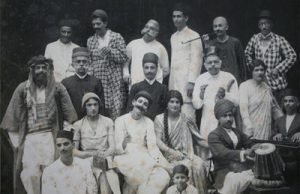 In the year 1852, a Parsi theatre group performed a Shakespearean play in Gujarati in the city of Surat. In 1853, Parsee Natak Mandali the first theatre group of Gujarati theatre was founded by Framjee Gustadjee Dalal, which staged the first Parsi-Gujarati play, Rustam Sohrab in October 1853, at the Grant Road Theatre in Mumbai, marking the begin of Gujarati theatre. The Natak “Uttejak Mandali” staged 1100 shows in 16 years. Post-independence India, the Parsi theatre took a turn and rose to popular cinema. Adi Marzban is responsible for freeing Parsi drama from the traditional form and bringing realism in this theatre.

These Parsi companies travelled abroad widely and assimilated the western techniques and themes with the Indian folk theatre and music to form a vernacular theatre. The Gujarati theatre which has been dominated by translated or transcribed commercial plays for a long time saw the growth of original plays like ‘Kumar Ki Chhat Par’ and ‘Kahat Kabira’ by renowned playwrights like Madhurai, Vinayak Purohit, Shiv Kumar Joshi and others.

The developments of the modern drama movement in Hindi began with Bharatendu Harishchandra during the last decades of the 19th century. His best-known plays are ‘Satya Harishchandra’, ‘Andher Nagari’ and ‘Bharat Durdasha’. The playwrights who dominated the Urdu and Hindi stage during 1900 and 1925 include Agha Hashr Kashmiri, Pandit Radhe Shyam Pathak, Narayan Prasad ‘Betab’, Tulsi Datt ‘Shaida’ and Hari Krishna ‘Jauhar’. Most of their plays were written for the Parsi Theatre. In the recent years, Jayashankar Prasad has also written some outstanding plays like ‘Skandgupta’, ‘Chandragupta’ and ‘Dhruvswamini’. Dramatic activity increased both in volume and in quality in the post-Independence period with the coming onto scene of talented playwrights like Dharmaveer Bharati (‘Andha Yug’), Mohan Rakesh (‘Ashadha Ka Ek Din’), Surendra Verma (‘Quaid-e-Hayat’), Feroz Khan (‘Tumhari Amrita’, ‘Mahatma Vs.Gandhi’) and others. 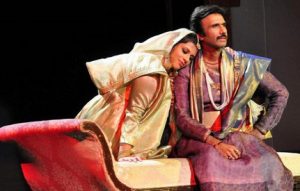 The city of Hyderabad gained much fame as an important centre of Urdu theatre, which flourished on the theme of humour. Babban Khan’s ‘Adrak Ke Panje’ and Abid Ali’s ‘Dedh Matwale’ are two outstanding specimens of humorous plays. ‘Adrak Ke Panje’, which is a satire on corruption in daily life, is acclaimed by the ‘Guinness Book of World Records’ as the longest one-man show, having run from 1965 to 2001. During 1970 and 1984 Qadir Ali Baig emerged as an eminent theatre personality in Hyderabad. He formed the New Theatre of Hyderabad in 1970 and featured in plays like Sakharam Binder, Adhey Adhoore, Khamosh Adalat Jaari Hai and Kehron Ke Rajhans. His period plays had sets and props that recreated the magnificence of the Mughal and the Asif Jahi eras in plays like Quli Qutb Shah,Tana Shah, Mahboob-e-Deccan and Kohinoor ka Lutera. His son Mohammed Ali Baig carries this tradition forward and has laid the foundation of the Qadir Ali Baig Theatre Festival.

Modern theatre also reached the other states in the south by the beginning of the 19th century. Ramashankar Roy, Basanta Kumar Mahapatra and others were the pioneers of the Orissa Theatre. In Tamil Nadu, the early exponents of theatre were Prof. Sundaram Pillai, Sankardas Swamigal, Sambananda Mudaliar and others. In 1955 the ‘Madras Players’ was formed by N.S.Yamuna and Gayathri Krishnaswamy under the auspices of the British Council. It is currently the oldest English Theatre group in India. The Malayalam theatre began as an offshoot of Tamil theatre. Ochira Velukutty, Thoppil Bhasi and N.N.Pillai are among the contributors of Malayalam theatre. In the current times, the dynamic duo of Crazy Mohan and Maadhu Balaji produced several comedy plays under the banner of Crazy Creations. Some of their plays are ‘Allaudin and 100 Watts Bulb’, ‘Kishkinda Kaandam’, ‘Marriage Made in Saloon’, ‘Return of Crazy Thieves’ and ‘Maadhu MLA’.