The Gupta Period (4th-7th A.D.) is often described as “the Golden Age of art and architecture in India”. The initial phase of the Gupta architecture was primarily Buddhist but in the later phase Hindu influence became dominant.

Some of the finest images of Buddha are products of this style of art. One of the best sculptures from the Sarnath depicts the Buddha giving his first sermon in the ‘Deer Park’. The images of the Buddhist pantheon include Indra, Surya, Yakshas, Yakshis, ‘dwarapalas’, ‘Mithuna’ couples, winged horses and mythical animals in Hinayana ‘stupas’ and ‘viharas’ as at Sanchi, Bharhut, Bodhgaya, Bhaja, Karle, Bedsa and Pitalkhoda, and the ‘Bodhisattvas’, the Buddha, ‘Tara’ and others in the Mahayana monuments as at Ajanta, Ellora, Aurangabad, Karle, Bedsa, Pitalkhoda and Kanheri. 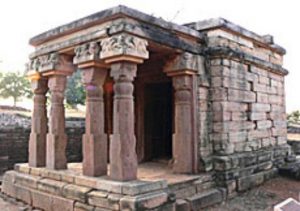 The firm foundation of temple architecture was laid during the Gupta period when the basic elements of the Indian temple consisting of a square sanctum and pillared porch emerged. The Gupta temples also had covered processional paths for circumambulation that formed a part of the worship-ritual. The earlier Gupta temples had a flat-slab, often monolithic roof, but the later temples developed a ‘shikhara’ made of brick and stone. The walls of the temples and their interiors were adorned with sculptures of deities, their consorts and other celestial beings. Many temple sculptures also depicted secular subject matters, composite animals and decorative motifs. The best examples of the Gupta Style of temple architecture include the ‘Parvati Temple’ at Nachana, the ‘Vishnu Temple’ at Tigawa, ‘Dasavatara Temple’ at Deogarh and the ‘Shiva Temple’ at Bhumara.