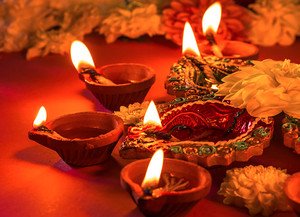 Diwali or the Festival of Lights is one of the most important festivals of India and is celebrated on a nation-wide scale on Amavasya or the dark night in the middle of the month of Kartik (October/November). The first day of the festival is called Naraka Chaturdasi or Choti Diwali. It falls on the 14th day of Kartik and marks the vanquishing of the demon Naraka by Lord Krishna. The second day is known as Lakshmi puja or Chopada Puja. On this auspicious day Lord Krishna preached Karmayoga through his Bhagwad Gita to Arjuna on the battlefield of Kurukshetra. Mahavira also attained Nirvana on this day. The third day is referred to as Kartika Shudda Padyami, Bali Padyami, Padwa or Varshapratipada. It marks the coronation of King Vikramaditya and the commencement of the Vikram Samvat. The Govardhan Puja is performed in North India on this day, which is also observed as Annakoot, meaning “mountain of food.” The fourth day is known as Bhayya-Duj in the Hindi-speaking belt, Bhav-Bij in Maharashtra and Bhai-Tika in Nepal. 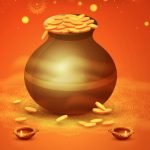 Dhanteras or Dhantrayodashi takes place two days before Diwali. It is celebrated in the honour of ‘Dhanavantri’, the physician of the gods and an incarnation of Lord Vishnu. According to legend, when the gods and demons churned the ocean for nectar (Amrit), Dhanavantri emerged from it carrying a jar of the elixir. The festival is also referred as Yamadeep-daan and lamps are kept burning throughout the night in reverential adoration to Yama, the ‘God of Death’. 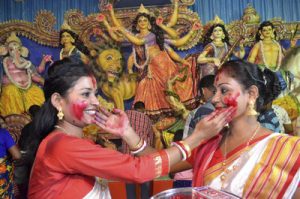 Durga Puja or Navaratri is a nine-day festival, which is celebrated mainly in West Bengal and other parts of India in the honour of Goddess Durga, commencing on the first night of the month of Ashwina (September/October). On Vijayadashami or the tenth day, a clay image of the Goddess is immersed in the sea or river. This immersion (visarjan) symbolises Durga’s return to her husband Shiva on the conclusion of her annual visit to her parental home. The nine days of puja are synonymous with the Navratris, during which Rabindra Sangeet, dances and various programmes form a part of the celebrations. In Gujarat, women and girls, decked in finery, dance the Garba and Dandia around a decorated earthen lamp for nine nights. In Tamil Nadu, the first three days of the festival are dedicated to Lakshmi, the next three days to Durga and the last three days to Saraswati. In some parts of the country, the celebrations end on the eighth day (ashtami), which coincides with Parvati’s birthday. 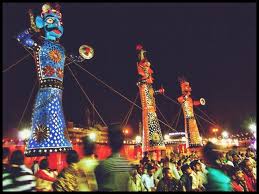 Dussehra, also known as Vijayadashami, is celebrated on the tenth day, which follows nine days of Durga Puja, in the month of Ashwina. During Dussehra celebrations, Ram Leela is enacted for nine days. Tableaux (Jhankis) are taken out in procession, depicting various stages of Lord Rama’s life. On the last day, huge effigies of Ravana, Kumbhakarna and Meghanath are set aflame at the sunset. Dussehra was basically a royal festival, which enjoyed the patronage of the Hindu rulers and sometimes even of the Muslim rulers. In Mysore, the Dussehra is celebrated with great fervour at the Chamundi Temple. In some southern states like Andhra Pradesh and Karnataka, an elaborate decoration is done using lamps, flowers and dolls (Bommai Kolu). The Dussehra is also celebrated with great fanfare at Kulu in Himachal Pradesh. Here, Lord Raghunath is worshipped on the first day, while the next nine days are marked by rituals and graceful ‘Natti’ dances. 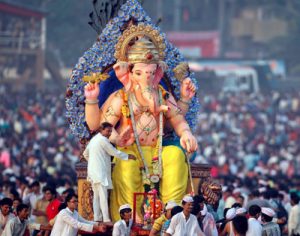 The birth anniversary of Ganesha is celebrated as ‘Ganesh Chaturthi’ on the fourth day of Bhadra (August/September) in the states of Maharashtra, Andhra Pradesh, Tamil Nadu, Karnataka and other parts of India. Ganesha, the son of Lord Shiva and Parvati, is considered as the god of wisdom and prosperity and is invoked before the beginning of any auspicious work. Ganesh Chaturthi was started by Shivaji to promote Indian culture and nationalism. Bal Gangadhar Tilak invigorated this festival to spread the message of freedom struggle and to defy the British, which had imposed a ban on public assemblies. During the Chaturthi or the last day, thousands of processions carrying idols of Ganesha converge on the lakes, rivers and seas for the visarjan or immersion ceremony.

This festival is celebrated largely in North India, especially in Bihar and Uttar Pradesh, during the month of Chaitra, to commemorate the birth of Hanuman, the monkey god, who was an ardent devotee of Lord Rama. The festival is especially important to Brahmacharis, wrestlers and bodybuilders, since Hanuman is regarded as the symbol of strength and energy. 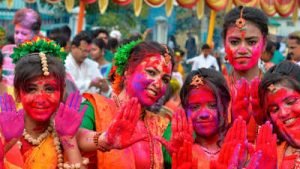 The festival of Holi is celebrated in the month of Phagun (early March). It announces the onset of spring after the end of winter. According to one popular legend, the festival of Holi is celebrated to mark the burning of the evil demon ‘Holika’ and signifies the triumph of good over evil. This lively festival is also associated with the eternal love of Radha-Krishna, and hence, ‘Kama’ or the ‘God of Love’, is revered during the festival in several parts of the country. Apart from the usual fun with coloured powder (gulal) and water, Holi is marked by vibrant processions that are accompanied by folk songs, dances and a general sense of abandoned vitality, amidst uninhibited consumption of Marijuana-based drinks like bhang and thandai. In rural Maharashtra the festival is known as Rangapanchami while in West Bengal it is celebrated as Dolyatra or Basant Utsav. 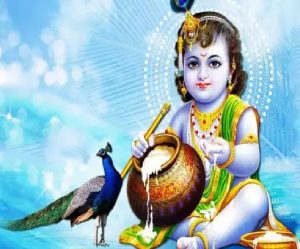 The birth anniversary of Lord Krishna is celebrated as Janmashthami during the month of Shravan (August/September). It is marked by singing of devotional songs and performance of Ras Leela to recreate incidents from the life of Krishna and to commemorate his love for Radha. In Maharashtra, the festival witnesses the exuberant enactment of Balmurali’s attempts to steal butter and curd from earthen pots beyond his reach. A group of young men and children form human pyramids and reach out to a suspended pot (matka) containing milk products and eventually break it. In Gujarat the town of Dwarka comes alive with major celebrations and hordes of visitors. 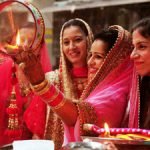 Karwa Chauth falls on the Kartik ki Chauth (fourth day of the waning moon) some time in October or November. It is the most important fast observed by the Hindu women for the prosperity, well-being and longevity of their husbands. The fast starts before sunrise and ends after worshipping the moon at night. Upon moon rise, women see its reflection in a plate filled with water and do puja invoking goddess ‘Gaur Mata’ and break their fasts. 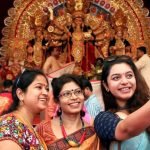 The culmination of the Navaratri festival is celebrated as Mahanavami and Goddess Durga is worshipped in the form of Aparajita. In many parts of India a Kanya Puja is performed during which nine virgins, symbolically representing the nine forms of the goddess, are honoured. 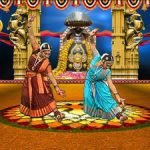 Maha Shivaratri is celebrated on the fourteenth day in the month of Magha (January/February). On this night Lord Shiva is said to have performed the Tandava or the dance of creation, preservation and destruction. It is also believed that during this night Shiva manifests himself in the form of a huge flaming lingam known as Jyotirlinga. It is customary for the devotees (Bhakts) of Shiva to observe fast during the day and maintain vigil during the night.

The ‘Naag Panchami’ is observed on the fifth day of Shravana, during which live cobras or their images are worshipped. Besides Lord Shiva, Ananta, the cosmic snake, and Manasa, the goddess of snakes are worshipped in different parts of the country.

Ramnavami is celebrated as the birth anniversary of Lord Rama in the month of Chaitra (March/April). It is widely celebrated in Ayodhya and Puducherry, two places closely connected with the events of the Ramayana. In Ayodhya, thousands of pilgrims converge at the Kanaka Bhawan Temple where colourful processions are held. 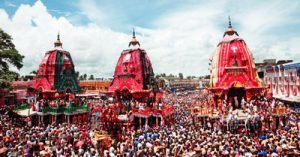 The Ratha Yatra or Car Festival of Lord Jagannath takes place once a year at Neelachal Srikshetra in Puri, Orissa on the second day of the month of Asadha (June/July). During the festival the Lords are consigned exclusively to the care of the non- Brahmin Sevayats, particularly of aboriginal Savara origin. Radiantly decorated wooden chariots called Nandighosa, Taladhwaja and Devadalana respectively with Lords Jagannath (Krishna), Balabhadra and their sister Subhadra leave the sanctum sanctorum of the Sri Mandir, pulled by millions of people. Of the three chariots, the one of Balabhadra moves first, followed by those of Subhadra and Jagannath. The procession ultimately reaches the Shri Gundicha Temple, where the deities sojourn for a week. The return journey, Bahuda Yatra, takes place on the ninth day or Asadha Sukla Dasami. According to the Sanskrit literary sources the Car Festival was in vogue in the 9th century even before the present Puri temple was constructed.

This is a harvest festival, which is celebrated a fortnight before the Diwali. People drink saffron-flavoured milk during a special moonlit night, referred as Kojagiri, while the full moon night is observed as the Navanna Purnima. In many temples, Goddess Durga is taken around the temple in a torch-lit procession called Chhabina.

It is celebrated mainly in southern India on the sixth day of Kartik. Skanda Shashthi commemorates the birth of Skanda, the six-headed son of Shiva and Parvati and commander of the celestial armies, who is also referred as ‘Kartikeya’, ‘Subrahmanya’ and ‘Murugan’.

There are twenty four Ekadashis observed by the Hindus during the year and the ‘Vaikunth Ekadashi’ is observed during November in the honour of Goddess Ekadashi.

Vasant Panchami or Sri Panchami is celebrated all over India on the fifth day of the month of Magha in January/February to honour Saraswati, the Goddess of learning.