The Lumiere Brothers, the inventors of cinematograph, were the first to import and exhibit motion pictures in India on July 7, 1896, when they unveiled six soundless short films at the Watson Hotel in Bombay. The first short films, ‘Cocoanut Fair’ and ‘Our Indian Empire’, were shot by an unknown foreign photographer in 1897. In the following year, two Italians, Colorello and Cornaglia organised film shows in tents at Azad Maidan in Bombay. Three other foreign narrative films ‘The Death of Nelson’, ‘Noah’s Ark’ and ‘Call on the London Fire Brigade’ were exhibited in January 1898. 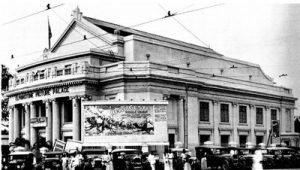 The first exposing of celluloid in camera by an Indian took place in 1899, when Harishchandra Bhatvadekar (Save Dada) shot two short films and exhibited them using Edison Projecting Kinetoscope. Hiralal Sen and F.B. Thanawalla were two other Indian pioneers involved in the production of short films in Bombay and Calcutta during the early 1900s. Thanawalla’s ‘Splendid New Views of Bombay’ and ‘Taboot Procession’ (both 1900) and Sen’s ‘Indian Life and Scenes’ (1903) were some of the best short films produced in India during that time.

​The first cinema house was established in 1900 in Madras by Major Warwick. The Elphinstone Picture Palace was opened in Calcutta in 1907 by Jamshedjee Madan. Madan’s early films were topicals of historic value like ‘Great Bengal Partition Movement and Procession’ (1905) and ‘Delhi Durbar and Coronation’ (1911). In 1916, the Universal Pictures set up Hollywood’s first agency in India, while R.Venkaiah and R.S.Prakash built Madras’s first permanent cinema, ‘the Gaiety’.