Indians met their tryst with international beauty pageants when Reita Faria won the Miss World Crown for the first time for India in 1966, making her the first Asian woman to win the event. This 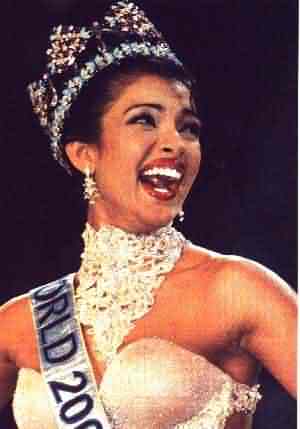 compelled the world to sit up and take a fresh look at the Indian women. Her remarkable feat paved the way for later competitors to step into her shoes and take the glamour world by storm. The year 1994 brought double honour to the Indian beauty in the form of the Miss World crown for Aishwariya Rai and the Miss Universe crown for Sushmita sen. In 1997 Diana Hayden was crowned the Miss World and in 1999 Yukta Mookhey repeated the feat. The first Miss Universe crown of the new millennium also went to Lara Dutta of India. Priyanka Chopra continued the trend by winning the 2000 Miss World title.

The grooming for such events has now become institutionalized in the form of the Femina Miss India contests. Different kinds of experts are involved in “making” the Indian beauty. There are experts to improve the diction (Sabira Merchant), design clothes (Hemant Trivedi and Ritu Kumar), aptly assisted by a team of cosmetic dentists, cosmetic surgeons, fitness experts, grooming experts and etiquette teachers. The success of Indian women in such high-profile beauty pageants, amidst tough competition from other contestants from different parts of the world, points to the growing confidence and self-esteem in the Indian women.

According a leading etiquette teacher Sabira Merchant puts it: “today’s contests are not about beautiful girls or beauty queens, it’s about the search for a complete woman”. Indeed, after years of fumbles and hick-ups India has now perfected the art of tailoring its contestants for this now role.