The Indus Valley or the Harappan civilization flourished during the Bronze Age i.e. 2500-2000 B.C. and is ranked among the four widely known civilizations of the Old World. Extensive excavation work undertaken during the post-Independence period identified hundreds of sites belonging to the Harappan civilization. The prominent among these are Dholavira (Gujarat), Kalibangan (Rajasthan), Lothal (Gujarat), Sarkotada (Gujarat), Diamabad (Maharashtra), Alamgirpur (Uttar Pradesh), Bhagwanpura and Banawali (Haryana), Kuntasi, Padri (Gujarat) and Mauda (Jammu). 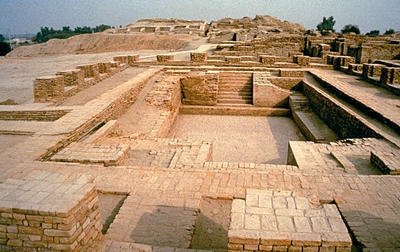 The chief characteristic of this civilization was its extensive town planning, which is evident from the gridiron pattern for the layout of cities, some with fortifications and the elaborate drainage and water management systems. Unlike contemporary civilizations at Mesopotamia and Egypt, the Harappan buildings were built of baked bricks. Bricks of fixed sizes, as well as stone and wood were used in construction. Buildings in the lower area were mainly functional rather than decorative and many houses had two storeys.

The most striking of the buildings was the Great Bath of Mohenjodaro, which was 54.86 metres long and 32.91 metres wide, with thick outer walls surrounded by galleries and rooms. The Granary complex was another important structure of the Harappan period, which comprised of blocks with an overall area of 55×43 metres.

Other articles on Indian Architecture :