The contribution of Jain art to the mainstream art in India has been considerable. Every phase of Indian art is represented by a Jain version and each one of them is worthy of meticulous study and understanding. Strictly speaking, Jain architecture cannot be construed as having its own style, as it started off as an offshoot of the Hindu and Buddhist styles. In the initial years, many Jain temples were made adjoining the Buddhist temples following the Buddhist rock-cut style. Initially these temples were mainly carved out of rock faces and the use of bricks was almost negligible. However, in later years Jains started building temple-cities on hills based on the concept of ‘mountains of immortality’ . 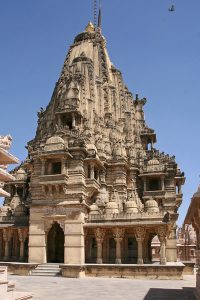 The Jain temples are divided into wards, guarded by massive bastions at its ends, with fortified gateways as the main entrances. These temple-cities were not built on a specific plan; instead they were the results of sporadic construction that took advantage of natural levels of the hills on which the ‘city’ was built. The only variation in these temples was in the form of frequent ‘chamukhs’ or four-faced temples, in which the image of a ‘Tirthankara’ faces the four sides, or four Tirthankaras are placed back to back to face four cardinal points. Entry into this temple is also from four doors. The Chamukh Temple of Adinath (1618 A.D.) is a characteristic example of the four-door temple.

The great Jain temples and sculptured monuments of Karnataka, Maharashtra and Rajasthan are world-renowned. The most spectacular of all Jain temples are found at Ranakpur and Mount Abu in Rajasthan. Deogarh (Lalitpur, Uttar Pradesh), Ellora, Badami and Aihole also have some of the important specimens of Jain Art.