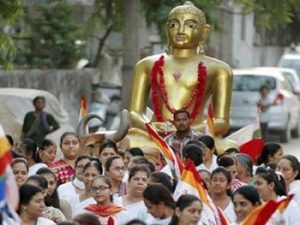 Mahavira Jayanti is the main Jain festival which is held to celebrate the birth anniversary of Mahavira, the 24th Tirthankara and the founder of Jainism. It is observed on the first day of the month of Bhadrapad. The festival is marked by great splendour and show during which Jain temples, dedicated to Mahavira, are decorated with flags and the idol is given a ceremonial bath (abhishek) and carried in a procession.

On this day Jain devotees visit sacred sites and worship the Tirthankaras or religious teachers. The festival is celebrated with great enthusiasm at the ancient Jain shrines in Gujarat and Rajasthan, besides the Parasnath Temple in Kolkata and Pawapuri in Bihar. 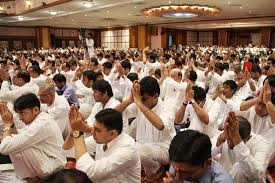 Paryushana is an annual festival that takes place in the month of Shravan (August/September). It is practised for eight days by the Svetambara sect of the Jains, while celebrations last for ten days among the Digambaras. It marks the retreat of the nomadic monks owing to monsoon showers and torrential rains. The festivities involve visiting divine temples or Upashrayas, listening to the discourses of Kalpa Sutra and performance of a meditation (kriya) called Pratikraman.

Deep Diwali is celebrated ten days after Diwali in the month of October/November. It marks the final liberation (Nirvana) of Lord Mahavira, the 24th Tirthankara, from the cycle of life. On this solemn occasion, Mahavira is worshipped and sacred scriptures are recited and houses are illuminated and decorated. The festival is enthusiastically celebrated at Pawapuri in Bihar, the place of death of Mahavira, and also in Girnar in Gujarat, which is an important Jain pilgrimage centre. 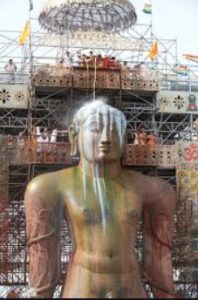 Literally meaning ‘the grand ceremonial head anointing of Bahubali’, this Jain festival is celebrated in the town of Shravanabelagola in Karnataka to pay homage to Lord Gomateshwara Bahubali. The Jain community holds Lord Bahubali, who was the son of King Rishabhadeva, in high esteem as he was the first to have attained salvation.

During the festival, his 18-metre high statue, which was installed in 981 A.D., is ceremonially anointed every twelve years with milk, sugarcane juice and herbal powders. The last anointing was done in February 2006, and the next ceremony will occur in 2018.