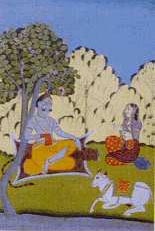 The earliest traces of painting in the Dhundhar or Amer-Jaipur region are to be found on the wall structures belonging to the Mughal period at Bairat and in the early 17th century palaces and mausoleums of Amer, in modern Rajasthan. These paintings are primarily folk-styled, although the male figures are shown wearing Mughal costumes and head dresses. This type of painting is also seen in some Jain manuscripts written at Mauzumabad and Amer during the same period.

This school of painting reached its acme towards the close of the 18th century during the reign of Sawai Pratap Singh. More than a dozen painters worked in his ‘surat khana’ to produce hundreds of miniatures to illustrate ‘Bhagawad Purana’, Ramayana, ‘Ragamala’, portraits and other works.