As a tribute to the memory of the late Prime Minister Pandit Jawaharlal Nehru and to his lifelong dedication to the cause of world peace and international understanding, the Government of India instituted the Jawaharlal Nehru Award for International Understanding in 1965, to be given annually for outstanding contribution to the promotion of international understanding, goodwill and friendship among peoples of the world. The award is administered by the Indian Council for Cultural Relations (ICCR). Associations, institutions or organizations are not eligible for the Award. The award carries Rs 2.5 million (25 lakhs) in cash, a citation and a trophy. 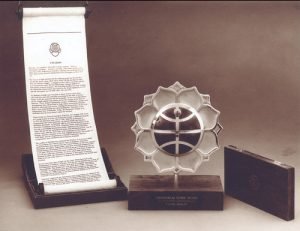 The Award is made by a seven members Jury appointed by the Government of India for this purpose. The Jury is headed by the Vice President of India. The Chief Justice of India is an ex-officio member of the Jury. The other members of the Jury include (1) one Chief Justice of a State High Court; (2) one Vice Chancellor of a University (3) one person representing the Press (4) two eminent persons from public life.

The Trophy has at its center an image of the globe with lotus petals radiating from its periphery. The impression of the globe is created by means of only four linear elements representing the axis and three major latitudes respectively. The blue-green is symbolic of the colour of the earth when seen from outer space, a reminder that our is the only green planet is the solar system. The vertical axis with the top and bottom latitudes resembles a human figure, the resemblance underscored by a hollow dot on the top. The significance of the lotus form has been celebrated variously in the Indian cosmology. Primarily it is symbol of human consciousness unfolding through the dark night of ignorance of the radiance of inner awakening and universal understanding.