The Feast of Passover or Pesach is the most important festival of the Jews, which is celebrated on the 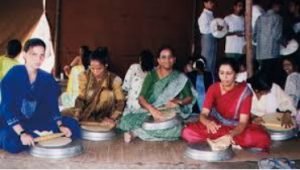 first day of the Jewish month of Nisan in March/April. The festival is also known by various other names such as Hag-ha-matzoth (‘festival of unleavened bread’), Zema Herutemu (‘season of our freedom’) and Hag-ha-aviv (‘festival of spring’). It is an eight-day festival which commemorates the liberation of the people of Israel from the Pharaohs of Egypt in the 13th century B.C. The beginning of this festival is marked by a Jewish ceremonial feast called Seder. Many Jews undertake a pilgrimage to the temple at Jerusalem during Passover.

The Bene Israel community of Indian Jews have maintained the traditions of the Feast of Passover.

‘Purim’ or the ‘Festival of Lots’ is observed on the 14th day in the Jewish month of Adar. It commemorates the first recorded victory of Jews over anti-Semitism. The festivities include prayer meetings, fasts and feasts.