Jews have been living in India for over 2,500 years ever since they first landed on the Malabar Coast of India. Indian Jews fall into five categories: ‘Bene Israel’, ‘Cochinis’, ‘Baghdadi Jews’, ‘Bene Menashe’ (“Manipur Jews”) and ‘Bene Ephraim’ (“Telugu Jews”). The ‘Cochinis’ form a small Jewish community in Kochi, Kerala and represent the earliest settlement of Jews in India. 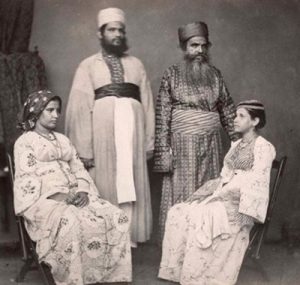 About 10,000 Jews are said to have come to the Kerala coast in 68 A.D. to escape religious persecution elsewhere in the world. Jewish settlements came up in Cranganore (now Kodungallur), Palayur, Pullut, Quilon, Madayi and Chowghat among other places. Regarded as among the oldest groups of Jews in India, the ‘Pardesi Jews’ of Cochin were settlers of the Mizrahi heritage. The Jewish community was bestowed with several valuable privileges by the native rulers. The famous Jewish Copper Plate given by Emperor Bhaskara Ravi Varman to the Jewish Chief, Joseph Rabban, in 1000 A.D. records the grant of several rights and privileges in perpetuity. However the arrival of Christian Portuguese started their persecution forcing them to flee Cranganore for Cochin in 1565 A.D. In the 15th Century, a group of European Jews arrived in Malabar after their expulsion from Iberia. A group of Arabic speaking Jews joined them in the 19th Cetury.

The Jews of Cochin were allowed full religious freedom by the British and the Dutch. In fact, the Jews reached their peak of prosperity under the Dutch. The Jews were originally divided into two classes : White or Jerusalem Jews, who were the original settlers, and the Black Jews, who were the natives working for the White Jews who converted to Judaism. White Jews were traders and merchants while the Black Jews were sawyers, blacksmiths, tailors, fishermen and others who practised various handicrafts. The Black Jews were later began to be known as the “Malabar Jews”. These Jews had synagogues at Mattancherry, Ernakulam, Parur, Cranganore and Chennamangalam, of which only the Synagogue of Mattancherry is functioning.

After the creation of Israel in 1948, there was a mass exodus of Indian jews and most Cochin Jews migrated to Israel in the 1950s. The current number in and around Cochin in places like Mattancherry, Parur and Ernakulam does not exceed 100.

The ‘Baghdadis’ are the Jews who came to India as traders from West Asia, mainly from Baghdad, about 250 years ago and settled down mainly in Mumbai, Pune and Kolkata.

The ‘Bene Menashe’ or  Manipur Jews constitute a community of Mizo and Kuki tribesmen which sees itself as descendants of the Manasseh or Menashe Tribe, which is one of the ten lost tribes of the Jews. They claim that after their forefathers were exiled and enslaved by the Assyrians but they somehow managed to save themselves and migrated first to China and then to India. These tribes are known as the “Children of Menmasseh” and live on the border of India and Myanmar. A majority of them are considered to be believers in Jesus Christ (‘Messianic Jews’). 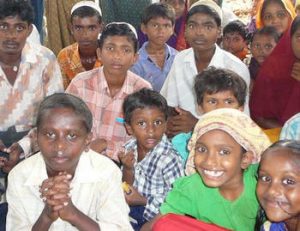 The ‘Bene Ephraim’ (known locally as “yudulu”) is a small group of Telugu-speaking Jews of around 40 nuclear families mainly in the Guntur district of Andhra Pradesh. These Guntur Jews believe that their ancestors left the Assyrian emprire around 722 B.C. and after traversing through Iran and Kashmir they settled down in Andhra Pradesh in 1100 A.D. Despite these claims, the identity of this group as a Jewish community appears to be of recent origin dating back to the 1980s, although for a long time they were clubbed with the Madiga community.

The Bene Ephraim community distinguishes itself from its Christian neighbors by keeping the Sabbath and major Jewish holidays, and following Jewish dietary laws. They observe and celebrate Jewish festivals such as Rosh Chodesh (the new month), Rosh Hashanah (the Jewish New Year), Selichot, Tzom Gedalia (the fast of Gedalia), Yom Kippur (the Day of Atonement), Sukkot (the Feast of Booths), Shemini Atzeret, Simchat Torah, and Hanukkah (the Festival of Lights).

The Indian Jews are a peaceful community, who follow the Hebrew calendar and observe a special thanksgiving ceremony called ‘Eliyahoo-ha-Nabiori’ (‘gratitude to Elijah the Prophet’) on festive occasions.