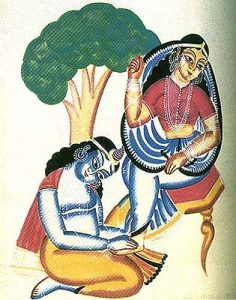 Kalighat paintings began to appear around 1830 and flourished for almost one century. These are regarded as the most authentic art form of the period in Kolkata. Earlier, the general term ‘Patuas of Kalighat’ was being used for the paintings, as these were believed to have been influenced greatly by the artwork (‘patuas’) of a village called Patuapura near the Kalighat temple of Bengal. These paintings, which are executed in watercolours, have intense vitality and voluptuous line that gives a unique sensuality of the full-rounded forms to the subject.