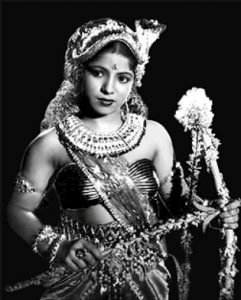 Modern Kannada theatre had a beginning in 1918 with the staging of a drama by T.P. Kelaram. In 1930s, K.S. Karanth, A.N.Krishna Rao and others went far ahead to enrich it. After Independence, Girish Karnad, Lankesh and their other contemporaries have contributed a great deal to the Kannada theatre. Girish Karnad was particularly prolific, having produced several Kannadi plays like Yayati, Tughlaq, Hayavadna, Naga Mandal and others.

Several troupes have also emerged which are involved in the promotion of Kannada Theatre. One such troupe based in Bengaluru, Ranga Gangotri, was formed 30 years ago and actively organizes festivals of non-stop plays.