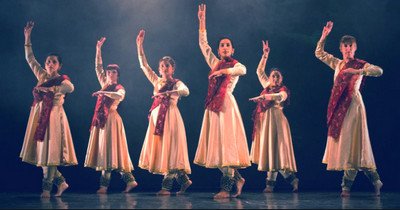 The word Kathak is derived from ‘Katha’, which literally means ‘storyteller’. In the olden days storytellers used to embellish their narration using song and dance, which eventually took the form of ‘Harikatha’ or ‘Kathakalakshepam’ in the southern part of India and ‘Kathak’ in the north. At first Kathak was very similar to the Bharatanatyam. The dance form underwent a drastic transition around the 15th century under the Mughal influence, which gave it a distinct Hindu-Muslim texture. It gradually got altered from a temple dance to a courtly entertainment. It is traditionally performed by both men and women.

The Kathak recital commences with the invocation to God, followed by ‘Tatkar’ or ‘Tukras’,

which consists of a series of successive rhythmic designs danced to the drum. Kathak is based on ‘bhava’, ‘raga’ and ‘tala’. Its compositions are based on the Hindustani Classical music. The dancer usually sings the compositions, which are based on the Krishna legends as well as the Puranic episodes, and interprets the stories through ‘abhinaya’, facial expressions and postures. The excitement in a typical Kathak performance is the ‘jugalbandi’, which is the interactive and competitive play between the dancer and the tabla player. Kathak is fundamentally a solo performance with a strong emphasis on footwork and rhythm.  However, in the recent times group Kathak performances are becoming popular. The language used for narration could be Hindi, Hindustani or Urdu. The costume includes a typical tight-fitting ‘churidars’ worn under ‘angarkhas’, ‘achkans’ or ‘kurtas’, with ‘payals’ (long strings of bells) wound firmly around the ankles. ‘Jaipur’, ‘Lucknow’ and ‘Benaras’ are the famous gharanas of Kathak.