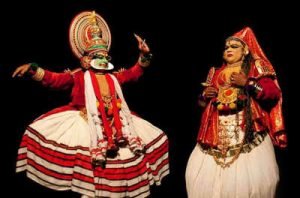 Kathakali is a traditional dance-drama of Kerala, which evolved during the 17th century A.D. from various

ritualistic, religious, folk and classical dance-drama traditions of Kerala. It can be considered as a synthesis of several dance forms of the region such as ‘Kudiyattam’, ‘Theyyam’, ‘Mudiyattam’ and even the martial arts form of ‘Kalaripayattu’. Phillip B. Zarrilli describes it as a “vigorous, masculine, dance-drama that is evolving continuously and adapting as the world around it changes.” The great Malayali poet Mahakavia Vallathol Narayana Menon has made a noteworthy contribution in preserving and promoting Kathakali in the 1930s.

A Kathakali performance is traditionally held in open air on a stage covered with coarse mats, which is lit by a brass lamp. Continuous thundering of the drums – Chenda and Maddala – precedes the ‘Mangalacharan’, an invocation to the Gods and the main dance. This is followed by pure dance called ‘Thodayam’, which is filled with expression (‘abhinaya’). The themes of the dance are taken from the Ramayana, Mahabharata, Puranas or the Vedas. The dancers adorn themselves in huge skirts and headdresses, wearing a most intricate style of make-up. Usually a dance performance begins in the night and may continue until dawn. The Kalamandalam is considered as the best troupe of Kathakali performers.