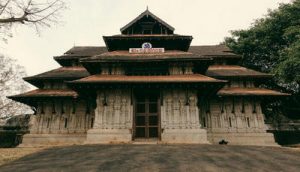 A distinct style of temple architecture developed in Kerala in which the temples were roofed with sloping tiers of metal or terracotta tiles. The ‘Vadakkunatha Temple’ at Trichur (12th century A.D.) and later temples found at Chengannur, Kaviyum and Vaikom are some of best specimens of Kerala Architecture. Vadakkunnathan Temple is over 1000 years old. The entrance of Vadakkunnathan Temple is facing north, east, south, and west which comprises four gopurams. The entrances are the four massive gateways and have a ball around the temple that reflects the skills and craftsmanship of constructing the place.

The ‘Padmnaswamy Temple’ built by the Rajas of Travancore has an impressive 7-storeyed façade with long galleries and courtyards in its interior, which is decorated by hundreds or sculptures and pavilions. The Kerala architecture is also typified by the ‘tharawads’ or ancestral homes made of wood like those of Kayaloram, Somatheeram and Surya Samudram.