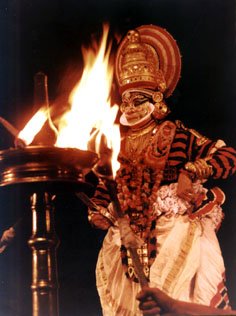 Koothiyattam or Kudiyattam is considered as India’s oldest continuously performed theatre form which adheres to the tenets of the ‘Natya Shastra’. Koothiyattam is the most renowned surviving theatre form that retained the essential elements and structural features of the Sanskrit theatre. It originated in Kerala earlier than the 10th century A.D. This one thousand year-old theatre style is the traditional privilege of the ‘Chakyars’ and ‘Nambiars’ (temple-castes of Kerala). Koothiyattam was traditionally a part of the temple rituals, performed as a kind of visual sacrifice to the deity.

Koothiyattam is a blend of symbolic gestures, stylised movements and chanted dialogues. Its costumes, make-up and form are conventional and its verses are rendered in Sanskrit, Prakrit and Malayalam. The instruments ‘Mizhavu’ and ‘Edakka’ provide the background music to the play. In Koothiyattam it is customary for all the leading characters to enact ‘Nirvahana’, which is a kind of flash-back or a recollection of past events in the story, before the characters step into the present. This is a long drawn out affair that can extend from a few days to a number of weeks. The story unfolds leisurely and politics, philosophy and social behaviour are covered in the comments.

Koothiyattam has survived over the years since the practising families have maintained the tradition in an orthodox manner. ‘Koottu’ or ‘Chakyar Koottu’ is considered as the precursor of Koothiyattam. Margi Madhu Chakyar is a leading exponent of Kootiyattam.