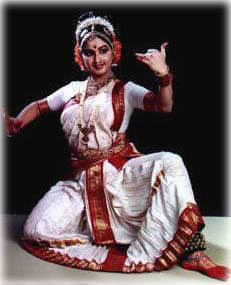 Kuchipudi, which is sometimes referred as ‘Ata Bhagavatham’, is a dance-drama form named after the village in Andra Pradesh from where it originated. It evolved during the 14th and 16th centuries under the influence of the Bhakti movement and the growing Krishna cult. It is believed that the Brahman boys of Kuchipudi village were the first performers of this dance form under the guidance of Siddendra Yogi. For a long time the dance was presented only at the temples as a ritualistic performance. Originally the dance was performed only by men belonging to the local Brahmin community known as ‘Bhagavathalu’, but in the recent times women have emerged as important performers. Nowadays, it is quite common to see Kuchipudi as a solo dance performed by women.

Kuchipudi is a synthesis of singing, drama, and intricate rhythmic dancing. It imbibed the elements from the classical Bharatanatyam as well as folk forms. The dance is based on the themes on the Hindu epics, the Ramayana and Mahabharata. A typical Kuchipudi performance consists of ‘Rangapuja’; ‘Kautvamu’; ‘Jatiswaram’; ‘Shabdamu’; ‘Kirtanam’; ‘Ashtapadi’ and ‘Shivalila Natyam’. In addition, ‘Padam’, ‘Javali’, ‘Simhanandini’, ‘Shloka’ and ‘Tillana’ may also feature. The highlight of the Kuchipudi performance is the ‘Tarangam’, where the dancer stands on the edge of a brass plate, balances a pot of water on her head and lighted ‘diyas’ in her hands and moves through complex ‘jatis’. The music in Kuchipudi is classical Carnatic, with the mridangam; violin and a clarinet serving as the accompanying instruments. ‘Bhama Kalapam’, ‘Gollakalapam’, ‘Prahlada Charitam’ and ‘Sashirekha Parinaya’ are the famous dance dramas in the Kuchipudi repertory.