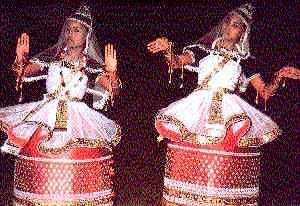 Manipuri is a generic name that covers all the dance forms of the state of Manipur. Dance is intricately woven in the Manipuri society. The Manipuris consider themselves as having descended from the ‘Gandharvas’, who are considered as the semi-divine legendary musicians and dancers of the celestial courts of Indira. It is believed that the ‘Manipuri Ras’ owes its origin to the ruling prince Karta Maharaj to whom this mystic dance form was revealed by Lord Krishna. Karta Maharaj got the various local folk dance forms adapted to the ‘Ras Leelas’, which led to the creation of a dance form called ‘Nat-sankirtan’ or ‘dance with kirtan’, which can be considered as the precursor of the Manipuri Ras. Thus, Karta Maharaj is often referred as ‘Bhagyachandra’ or the ‘Father of Manipuri Ras’. 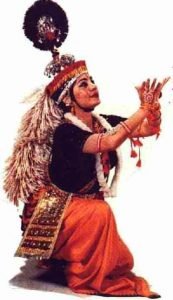 Movement. The lyrics are taken from the works of great saint lyricists like Jayadeva, Vidyapati, Chandidas or from the ‘Bhagwad Purana’. The Manipuri dance performance itself reflects a fine merger of romance with devotion, reflecting a vigorous, though tender, form of expression. In this dance form, the feminine (‘Lasya’) aspects predominate and the sentiment of love or the ‘Shringar Rasa’ (erotic mood) pervades the entire performance. There is a gentle balance of the three elements of ‘Nritta’ (pure dance), ‘Nritya’ (interpretative dance) and ‘Natya’ (acting). The accompanying instruments of Manipuri Ras consist of khol or mridangam, manjira and flute. The costumes are rich and ornamental and extremely captivating.

Rabindranath Tagore, during his visit to Sylhet in 1919, was so fascinated by a performance of Manipuri Ras that he decided to include it in the curriculum of the Shantiniketan University.