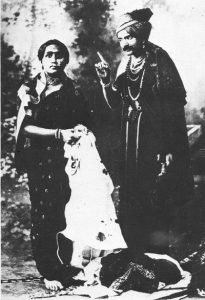 Vishnu Das Bhave was a pioneer of Marathi theatre, who tried to give a new dimension to the Indian theatre with his effective plays like Raja Gopichanda and Sita Swayamvar in 1840s. His innovations consisted in having the play’s characters act in a manner closer to that found in everyday encounters between people and the inclusion of some western stage production techniques, such as changeable scenery.

Anna Saheb Kirloskar laid the foundation of commercial repertories in the Marathi theatre with his Kirloskar Natya Mandali. In 1880, they started regular theatre with their Abhigyan Shakuntalam. Kirloskar retained Bhave’s adaptation and discarded the convention of having the Sutradhara provide all of the singing. In his performances, the characters themselves did their own singing. He included more literate Marathi vocabulary and songs and cleaned up the vulgarities of the Vidusaka.