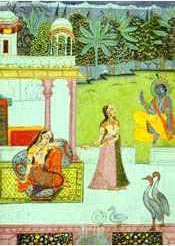 The most important centres of Marwar were Jodhpur and Bikaner, both ruled by the Rathods, and Jaisalmer ruled by the 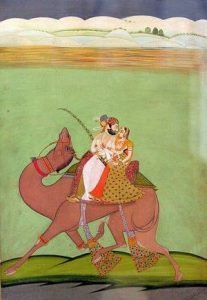 Bhatis. The typical Marwar painting of bold lines and blazing colours, showing well-built heroic males wearing prominent whiskers and huge turbans and colourfully attired dainty damsels flourished in Jodhpur in the 15th and the 16th centuries. Initially, the paintings followed the Mughal style but by the middle of 18th century the Mughal style faded and the Rajput elements (linear rhythm coupled with glowing colours) became more predominant. The reign of Karan Singh (1631-1669) witnessed the production of many ‘Ragamala’ genre paintings by the Mughal artists like Ali Raza and Hamid Ruknuddin. This style of painting reached its climax under Raja Man Singh (1803-1843). Extensive series of paintings illustrating ‘Shiva Purana’, ‘Natacharitra’, ‘Durgacharitra’, ‘Panchatantra’ and the ‘Kama Sutra’ were produced under his patronage.

Bikaner recruited skilful and experienced painters from the Mughal court for creating highly finished miniatures in the Mughal painting-like style. These painters, known as ‘Ustas’ created some of the finest representations of ‘Rasikapriya’, ‘Ragamala’, ‘Baramasa’, ‘Krishnalila’ and portraits and court paintings. Paintings on wooden panes and door panels and camel hides became quite typical of the ‘Usta’ style of Bikaner. The ‘thikanas’ of Pali, Chanerao, Jalor, Kuchaman and Nagaur also employed painters who worked in styles close to the Marwar idiom.