Apart from the Harappan findings, the earliest surviving architectural heritage in India pertains to the reign of the Mauryan Empire. The Mauryan rulers were great patrons of art and architecture and the buildings and pillars of this period can be considered as some of the finest specimens of Indian art. Megasthenes, the great Greek ethnographer and author of the work ‘Indika’, was considerably impressed by the Mauryan art. He gave a topographical account of Pataliputra, the capital of the Mauryan Empire, and described it as “the greatest city in India”, having the shape of a parallelogram and girdled with a wooden wall . Megasthenes described that most of the houses in the cities were made of wood and the royal palace at Pataliputra itself was made of timber . The art of polishing of wood reached its perfection during the Mauryan period but rocks and stones were not in much use.

Chandragupta Maurya built many buildings, palaces and monuments with wood, most of which perished with time. The greatest monument of his period was the old palace at the site of Kumrahar. According to the account of Megasthenes, the palace was more magnificent than the Achaemenian palaces of Susa and Persepolis.

During the Mauryan times, the planning and layout of cities were regarded as specialized activities. The introduction of cut stone as a building material in religious architecture and sculpture appears to have first occurred during the Mauryan period . Ashoka was the first Mauryan Emperor who began to “think in stone”. The stonework of the Ashokan Period (3rd century B.C.) was of a highly diversified order and comprised of lofty free-standing pillars, railings of the stupas, lion thrones and other colossal figures. The foundation of the Buddhist School of architecture in India was laid during the reign of Ashoka, when several rock-cut caves, pillars and ‘stupas’ were built. A number of cave-shrines belonging to this period have been excavated in the ‘Barabar’ and ‘Nagarjuni Hills’ and Sitamarhi in Bihar. These rock-cut sanctuaries are simple in plan and are devoid of interior decorative carvings. The caves have several inscriptions, which indicate that these rock-cut sanctuaries were constructed as residences for the monks of the ‘Ajivika’ sect. 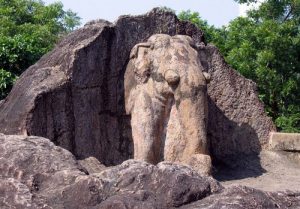 The earliest rock-cut sculpture in India was the Ashokan rock-edict at Dhauli, near Bhubaneshwar, which has a sculpted elephant on the top, signifying Ashoka’s conversion to Buddhism after his Kalinga victory. The monolithic Ashokan pillars were lofty free standing monolithic columns erected on sacred sites. Originally there were about thirty pillars but now only ten are in existence, of which only two with lion capitals stand in situ in good condition at Kolhua and Laurya Nandangarh respectively. The Sarnath pillar is another fine example of the sculpture of the Ashokan period. Two of the Ashokan edicts have also been found at Laghman, near Jalalabad in modern Afghanistan, which throw light on the contacts established between India and other countries during that time. Ashoka was responsible for the construction of several stupas at Bharhut, Bodhgaya, Sanchi, Amaravati and Nagarjunakonda. He had also built a number of palaces, but most of them have perished.

Ashoka’s palace near Patna was a great work of art. Enclosed by a high brick wall, the highlight of the palace was an immense 76.2 metres high pillared-hall having three storeys. The Chinese traveller Fahien was so impressed by this palace that he stated that “it was made by spirits” and that its carvings are so elegantly executed “which no human hands of this world could accomplish ”. It was made of wood and seemed to have been destroyed in fire. Its existence was pointed out during excavations at Kumrahar, near Patna, where its ashes have been found preserved for several thousand years.

Sanchi Stupas: The early stupas had plain and simple structures having hemispherical shapes with low bases. The later stupas assumed an increasingly cylindrical form. The early stupas were known for their simplicity. Apart from the ruins of stupa at Piprahwa (Nepal), the core of stupa No.1 at Sanchi can be considered as the oldest of the stupas. Originally built by Ashoka, it was enlarged in subsequent centuries.

Amaravati Stupa: Amaravati Stupa built in second or first century B.C. was probably similar to the one at Sanchi, but got transformed from a Hinayana shrine to a Mahayana shrine in the later centuries. The diameter of the dome of the stupa at ground level was about 48.76 metres and its height was about 30 metres. Amaravati stupa had free-standing columns surmounted by lions near the gateways. The dome was covered with sculptured panels.