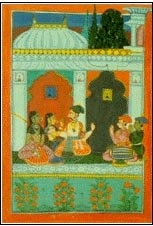 Mewar was in the forefront in all fields of creative art and architecture under illustrious rulers like Maharana Kumbha and Maharana Sanga. Illustrated manuscripts produced at Chittor, Delwada, Ahar and Chawand from 13th century onwards provide a continuous history of the Mewar School. A Ragamala set painted at Chawand in 1605 A.D. by Nisardi is a landmark of this school followed by many masterpieces of Manohar and others produced under Maharana Jagat Singh. Multi-painting sets of ‘Ramayana’, ‘Gita-Govinda’, ‘Sur Sagar’, ‘Arsh Ramayana’ and ‘Rasikapriya’ were prepared in an unmistakably bold, colourful and well defined style.

Nathdwara became an important religious and artistic centre in the 17th century and pictures and ‘Pichwais’ or large screen paintings were produced in abundance. Other sub-schools of Mewar are Devgarh, Sawar, Sirohi, Shahpura, Pratapgarh, Banswara and Dungarpur, each showing its own regional characteristic in a subtle but recognizable manner.