The miniatures were small works made on perishable material that made their first appearance on the Indian cultural scene in the 5th century A.D. The miniature artist looked upon a musical text, ‘Narada Shiksha’, for inspiration and began to note the relationship that exists between sound and sentiment.

In Bengal, Bihar and Orissa, the Buddhist manuscripts were illustrated, mostly depicting paintings of the Buddha on palm leaves. They resemble the Ajanta style on a miniature scale. In Gujarat, illustrations in Jain manuscripts can be seen at different places. The fine application of colour began to diminish in the later stages. The Indian miniature paintings have enchanted art lovers for centuries. The dazzling colours of these paintings – rich blues, shell powder whites, vermilions and tropical greens – often accented with gold and silver leaves that beguile the eye.

A characteristic feature of the Indian miniature is the outline of the figures, which can be thin or thick, depending on the degree of prominence the artist 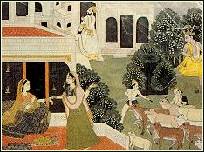 desired to give to the figures. Some of the Mughal miniatures were a true reflection of life during those times, throwing light on the architecture, costumes and other traditions of that period. The idea of symbolism pervaded across many of the miniature paintings. The various themes of miniatures were ‘Ragamala’, ‘Nayik Nayika’, seasons, god and goddesses, animals of mythology and rural scenes.

The Persian influence is quite evident in the different folk paintings of India. The schools of Mewar or Udaipur or Jaipur in Rajasthan have incorporated their desert landscape and architecture. The hill kingdoms of Kumaon and Kangra are renowned for fine drawings, while the plateau regions of Malwa and Bundelkhand specialize in attractive brushwork. The crowning glory of miniature paintings was the provincial Mughal works, attributed to the reign of emperors Akbar and Jahangir. These paintings mainly depict the rulers themselves, besides historical personages and musicians. The Tanjore paintings of the South typically depict the Krishna-Shiva episodes. The art of palm-leaf illuminations were traditionally labelled as ‘patra-lekhana’ in the medieval Indian canons. But later a generalised term ‘pata chitra’ was conveniently used to define paintings other than wall painting but including painted scrolls and panels.