In the 18th and 19th centuries, a hybrid style of painting emerged that blended elements from the Rajput, Mughal and other Indian styles of painting with European styles and treatment. These paintings were produced by artistes engaged by the British Company officials and were collectively referred as “Company Paintings”. They are typified by the use of water colours and, in technique, by the appearance of linear perspective and shading.

This style of painting originated in different cities of India, particularly Kolkata, Chennai, Delhi, Patna, Varanasi and Thanjavur. Under the patronage of Lord Impey and Richard Colley Wellesley, several artistes were engaged in Kolkata who painted birds, animals and plants. In Delhi the artistes used ivory as a base for painting and the popular subjects were Mughal monuments, residences, servants, carriages, horses and other scenes. Sewak Ram (Patna), Ishwari Prasad (Patna) and Ghulam Ali Khan (Delhi) were among the famous artistes of this genre of painting. This style of painting survived into the 20th century.

In the beginning of the 20th century, several schools of art were established by the British in Kolkata and other places, which encouraged a more westernised version of painting. John Zoffany, John Smart, Tilly Kettle, George Chinnary and William Hodges were the early British painters who painted in oil.

Raja Ravi Verma (1848-1906) of the princely state of Travancore can be considered as one of the pioneers of modern painting in India. He evolved a style of fusion paintings by combining Indian costumes, jewellery and other regional elements with elements of the western art. He used themes from mythology, epics like Ramayana and Mahabharata and other ancient texts in his paintings. His painting ‘Nair Lady Adorning Her Hair’ (1873) won a gold medal at the World Art Exhibition held at Vienna.

Ernest Binfield Havell and Abanindranath Tagore founded the Bengal School of Painting, which advocated the use of Indian themes, taking inspiration from the Mughal miniatures and Rajasthan paintings. This encouraged several younger artistes to experiment with new styles and come out with innovative modes of expression.

Abanindranath Tagore’s best-known painting, ‘Bharat Mata’, which was completed in 1905, depicted the growing nationalistic aspirations in the country at that time. ‘Arabian Nights’ series (1930), ‘Radha and Krishna’, ‘Black Girl’ and ‘Portrait of Dhira Devi’ are some of his renowned works. Tagore also attempted to establish links with the Japanese artistes in order to evolve a Pan-Asian style of art. The Noble laureate Rabindranath Tagore started painting in 1930 at the age of 67 and produced some very individualistic and modern paintings.

Nandlal Bose, Sarada Charan Ukil, Asit Kumar Haldar, Surendranath Ganguli, Samarendra Gupta, Devi Prasad Roy, Hakim Mohammed Khan and other renowned painters of this School played a leading role in the renaissance of art in India. Nandlal Bose (1882–1966), who was a disciple of Abanindranath Tagore, created a unique style of painting in Kala Bhawan, Shantiniketan by experimenting and blending various techniques. He was greatly inspired by the Ajanta murals and his favourite themes were village life, women and mythological scenes. Bose’s series – ‘Chaitanya’, ‘Haripura-Posters’ and ‘Natir-Puja Murals’ – are considered as some of his best creations.

Jamini Roy, another renowned Indian painter, developed a new style based on the simple folk milieu of Bengal as a reaction to paintings of the Bengal School. He used village dyes in his paintings and adapted elements from the ‘patuas’ of Kalighat such as the angular forms and harsh lines. ‘Bride and two Companions’ (1952) and ‘Dual Cats with one Crayfish’ (1968) are key works of Jamini Roy. Amrita Shergil was another acclaimed contemporary modern Indian painter, who was greatly inspired by the Mughal miniatures and Ajanta murals. ‘Brahmacharis’, ‘Child Wife’ and ‘Preparing the Bride’ are some of her great works. 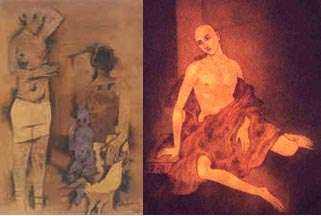 In 1947 a new school of art, known as the Progressive Artists’ Group, emerged in Mumbai, which transformed the contemporary art scene of India by their use of bold and progressive themes amalgamated with soft and magical ones. Francis Newton Souza was the founder of this group, while M.F.Husain, S.H.Raza, S.K.Bakre and H.A.Gade were other prominent members. This group organised its first painting exhibition in 1948, which was opened by Mulk Raj Anand, the renowned art critic and novelist. Professional art galleries were opened in Delhi and Mumbai by 1960. In the course of the next two decades several abstract painters like Balraj Khanna, V.S. Gaitonde and J.Swaminathan emerged on the scene. G.R.Santosh, Biren De and others presented the ‘Tantra Art’ on canvas in oils and acrylics.