A distinct style of painting emerged during the Mughal period, which was greatly inspired by influences from Persia. New themes, colours and forms began to appear. Court scenes were depicted with great opulence, as also historical events, hunting scenes and other royal activities, along with flowers and animals. Picturesque sceneries, usually hilly landscapes, were the favoured backgrounds used by Indian artists, who tried to blend the Persian ideas with Indian motives in an ingenuous manner. The Mughal paintings were known for their subtlety and naturalism. 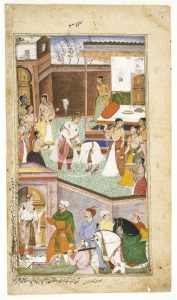 All Mughal rulers were great admirers of painting, with the exception of Aurangzeb. Mir Sayyid Ali and Abdus Samad were two great painters in the courts of Humayun and Akbar. Abus Samad was bestowed with the title “Shirinqalam”. Akbar can be considered as the real founder of the Mughal painting. Several noteworthy works were completed during his reign, which include the ‘Razm-Nama’ (which was Mahabharata in illustration), ‘Hamza Nama’, ‘Timur Nama’, ‘Babur Nama’ and ‘Akbar Nama’. The ‘Razm-Nama’ was completed in 1589 A.D. and comprised of 169 paintings. The ‘Akbarnamas’ were official state documents meant to dazzle with their splendour, and to create, uphold and reinforce tradition . Mughal paintings were generally a work of collaborative effort involving numerous artists and craftsmen. Akbar had particular admiration for the Hindu artists, notably Daswanth, Basawan, Kesu Das and Manohar.

The Mughal painting came under the Western influence towards the beginning of the 17th century. New 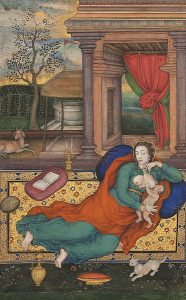 techniques such as the use of light and shade to capture space and volume and the use of atmospheric effects to indicate spatial recession and the aerial perspective were introduced in the Mughal painting. The Jesuit missions to the Mughal courts also strengthened the synthesis between these two diverse cultures, leading to one of the most flourishing artistic exchanges in the medieval period. Basawan’s ‘Madonna and Child’ and Manohar’s ‘Christ as Salvator Mundi’ are some of the masterpieces of this period.

Jahangir (1605-1627) was the most enthusiastic patron of the Mughal painting . The beauty of nature, in the form of plants, animals and birds, became an important subject of Mughal paintings during his time. Jahangir promoted calligraphy and also introduced portrait painting. Another significant development of Jahangir’s time was the popularity of the albums of paintings. The Western influence on Mughal painting became more pronounced during his period and the use of nimbus behind the heads of the emperors in the paintings came in vogue. Jahangir’s reign is regarded as a period of great synthesis between the Indian, Persian and European elements, which led to the emergence of a distinct and novel style. Some of the great painters of Jahangir’s court were Abdul Hasan, Bishandass and Mansur; the latter won the title ‘Nadir-ul-Asr’ from the emperor. 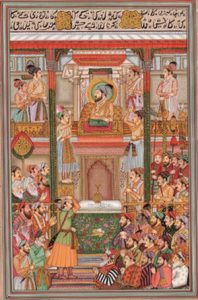 During the reign of Shah Jahan, painting got a new romantic flavour and love, romance, portraits and the ‘durbar’ scenes became the common themes. The artists portrayed the romances of Laila-Majnu, Shirin-Farhad and Baz Bahadur-Roopmati. Elephant fights and men controlling ‘mast’ elephants are also shown in a number of paintings. Another common theme with the Mughal artists from the last quarter of the 17th century and early 18th century is that of a young lady standing under a willow tree holding a branch. The leading painters of Shah Jahan’s period were Muhammad Faqirullah Khan, Muhammad Nadir, Mir Hashim, Bichitr, Anupchchatar, Chitarman and Honhar.

Aurangzeb’s apathy towards painting forced many great artists to migrate to other kingdoms in Rajasthan, Punjab and other parts of the country, leading to a decline in the Mughal painting. Bahadur Shah I (1707-1712), during whose reign the magnificent painting ‘Shahjahan-Nama’ was produced, tried to restore the court patronage of painting. Farruksiyar (1713-1718) continued the royal patronage of painting and so did Muhammad Shah Rangila (1719-1748). The Mughal painting gradually went into oblivion with the invasion of Nadir Shah in 1739 A.D. and the exodus of artists from Delhi to other parts of the country.