The Mughal rulers were visionaries who contributed significantly in the all-round development of various arts, crafts, music, building and architecture. Babar took considerable interest in erecting buildings, though few have survived. The mosque at ‘Kabuli Bagh’ at Panipatin Punjab and the Jami Masjid at Sambhal near Delhi, both constructed in 1526 A.D., are the surviving monuments of Babar. His son Humayun laid the foundation of a city called ‘Dinpanah’ at the Purana Qila in Delhi but the city could not be completed. The Persian influence on the Mughal architecture is evident in the ‘Humayun’s Tomb’ at Delhi, which was designed in 1564 A.D. by Humayun’s widow Haji Begum. The monument represents an outstanding landmark in the development and refinement of the Mughal style. In fact, the design of the Taj Mahal was modelled on this tomb.

The chief feature of the architecture of Akbar’s time was the use of red sandstone. In principle the construction was of trabeate order, although the “Tudor” arch was also used. The domes were of the “Lodi” type, while the pillar shafts were many-sided with the capitals being in the form of bracket supports. One of the first major building projects was the construction of a huge fort at Agra, followed by the massive sandstone ramparts of the Red Fort. 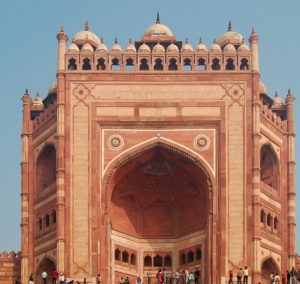 The most ambitious architectural exercise of Akbar, and a glorious example of the Indo-Islamic architecture, was the creation of an entirely new capital city at Fatehpur Sikri, which has been described as “a frozen moment in history”. The buildings at Fatehpur Sikri blended both the Islamic and Hindu elements in their architectural style. The ‘Buland Darwaza’, ‘Panch Mahal’ and the Dargah of Saleem Chisti are most imposing of all the buildings of Fatehpur Sikri. The ‘Diwan-e-Khas’ is another fascinating structure in the complex which was designed for private audiences. It is cubical in form with an elaborate central column connected to the four corners by bridges. The square plan, although of Central Asian origin, would have represented to the Hindu craftsmen as the “mandala” model of cosmos. There are several palaces in the complex including ‘Jodha Bai’s Palace’ and the houses of Miriam, the Sultana and Birbal.

Akbar’s successor Jahangir (1605-1627 A.D.) concentrated more on painting and other forms of art than on building and architecture. However, some noteworthy monuments of his time include Akbar’s Tomb at Sikandra near Agra, which was completed in 1613 A.D. This monument represents a major turning point in the Mughal history, as the sandstone compositions of Akbar were adapted by his successors into opulent marble masterpieces. Jahangir is the central figure in the development of Mughal gardens. The most famous of his gardens is the ‘Shalimar Bagh’ on the banks of Lake Dal in Kashmir. The adjoining ‘Nishat Bagh’ built by Asaf Khan also belongs to this period. The Jahangir’s Tomb at Shadera near Lahore, built by his wife Nur Jehan, is another outstanding architectural production of this time. 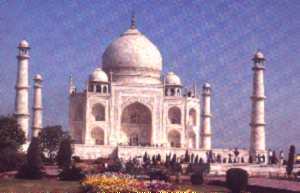 The style of Mughal architecture found expression of exceptional splendour during Shah Jahan’s reign (1628-1658 A.D.). The single most important architectural change was the substitution of marble for red sandstone. He demolished the austere sandstone structures of Akbar in the Red Fort and replaced them with marble buildings such as the ‘Diwan-i-Aam’ and ‘Diwan-i-Khas’. In 1638 A.D. he began to lay the city of Shahjahanabad beside the river Jamuna. He built the Jama Masjid at Delhi, which is the largest mosque in India, as also the Jami Masjid at Agra in 1648 A.D. However, it is for the Taj Mahal, which he built as a memorial to his beloved wife, Mumtaz Mahal, that he is most often remembered. The principle feature of Mughal architecture during the Shah Jahan’s time was that the mellow marble had subtle low relief carving, lace like ‘jalis’, exquisite inlays, ‘pietra dura’ and calligraphy. The ‘pietra dura’ work was first incorporated in the ‘Itamad-ud-Daula’s Tomb’ at Agra built by Ghyas Beg, father of Nur Jehan. The extensive decoration of the interiors of monuments with precious and semi-precious stones using the ‘pietra dura’ technique, which developed in Florence in the 16th century, and the use of pictures, jewellery and metal-works indicate considerable European influence on the Mughal art of this period.

Jahan Ara Begum, daughter of Shah Jahan, was also a generous patron of architecture and showed an eclectic taste in building spacious gardens, mosques, ‘madrasas’ and ‘serais’. She built the famous ‘Begum Ka Bagh’ and ‘Begum Serai’ at Delhi. She also built her own tomb near the dargah of Hazrat Nizamuddin in New Delhi. The architectural projects of Aurangzeb’s reign (1658-1707 A.D.) are represented by the ‘Bibi-ki-Maqbara’, the tomb of his wife Begum Rabia Durani, which is a poor replica of the famous Taj Mahal but, nevertheless a fine example of the Mughal architecture in the Deccan region.

The death of Aurangzeb in 1707 A.D. led to the decadence of Mughal architecture. Aurangzeb’s daughters Zeb-un-nissa Begum and Zinat-unnisa Begum contributed in a small way in carrying forward the Mughal trend of architecture. Zinat-unnisa Begum built the ‘Zinat-ul-Masjid’ at Daryaganj in Old Delhi in 1711 A.D., while Zeb-un-nissa built her own garden and tomb at Nawankot near Lahore. The last Mughal Emperor Bahadur Shah Zafar’s favourite wife Zinat Mahal built the ‘Zinat Mahal’ in the Lal Kuan bazaar in Delhi.