The Ajanta and Ellora Caves, the Bagh Caves and the Kailasanatha, Talagirisvara, Brahadiswara, Virupasaka and Virabadra Temples are some of the places where sufficient remnants of murals from ancient periods have survived. 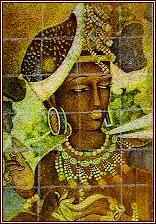 The earliest surviving murals or wall paintings in the Indian subcontinent are those of Ajanta and Ellora. The Ajanta Caves, carved out of volcanic rock around 4th century A.D., are renowned for their rare mural paintings, which were completed over a period of four to five centuries under the Mauryan Empire. The themes of these wall paintings range from events in the life of the Buddha and the Jataka stories, to decorative patterns of flowers and animals. These paintings depict human values and the social fabric, besides portraying costumes, ornaments and styles of the period.

The Ajanta artists were especially skilled in bringing their subjects into a vivid bustling life. These murals were painted with 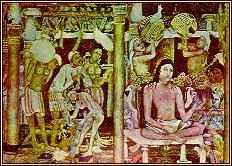 vegetable and mineral dyes in caves . The artists drew the outline in red ochre, then applied the colours and renewed the contours in brown, deep red or black. The human and animal forms show a variety of graceful poses. The styles of later murals reveal merging of two streams of art, the Satavahana Art of Andhra and the Gupta Art of North India, resulting in a classical style of painting that had profound influence on later paintings for centuries to come, both in India and some other Asian countries. 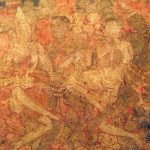 Mural paintings in Ellora are found in five caves, but they are somewhat preserved only in the Kailasa Temple. The paintings were done in two series – the first, at the time of carving the caves and the subsequent series was done several centuries later. Some of the earlier paintings depict Vishnu and Lakshmi borne through the clouds by the celestial bird Garuda. The protruding eyes typical of the later Gujarati style appear for the first time in Ellora. The later paintings commonly depict processions of Shaiva holy men.