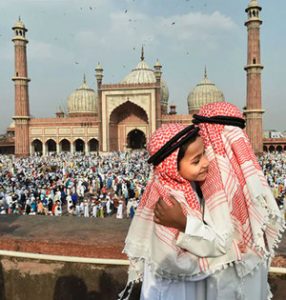 Eid-ul-Fitr is the most festive occasion in the Islamic world. It comes at the culmination of the holy month of Ramadan, which is the ninth month in the Islamic calendar. It marks the end of a month-long period of fasting, when every adult Muslim refrains from taking food or water from a little before sunrise until the sunset, as has been ordained by the Shariat or the Divine Law. The first day of the month of Shawwal, following the appearance of the New Moon at the end of Ramadan, is celebrated as Eid-ul-Fitr. It is believed by the Muslims that the Holy Quran was revealed on one of the odd nights during the last ten days of Ramadan, usually considered to be the 27th day of Ramadan. Historically speaking, the month of Ramadan is associated with two important victories of Prophet Muhammad – the battle of Badr and the conquest of Makkah. The martyrdom of Ali Bin Abu Talib happened on the 21st day of Ramadan. 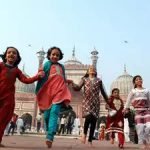 ‘Id-ul-Adha’, ‘Id-ul-Zuha’ or Bakrid is celebrated on the tenth day of Dhul-hijja, the twelfth month in the Islamic calendar. The Id-ul-Azha denotes the complete devotion of Prophet Ibrahim to Allah, who when commanded to sacrifice his only son Ismail, readily agreed and cut off his son’s head, only to discover that a ram had been sacrificed instead. Since then, a ram or bakra is sacrificed on the Eid and the sacrificial meat is distributed to the poor. The Eid is also the time when many Muslims undertake the pilgrimage of Hajj to Makkah. 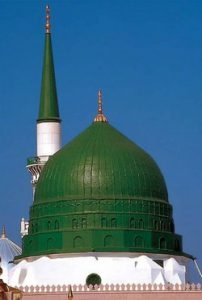 Prophet Mohammad was born on the twelfth day of Rabi-ul-Awwal, the third month in the Muslim calendar. His birth anniversary is celebrated as the ‘Milad-un-Nabi’ or ‘Mawlid an-Nabi’. The word Milad is been derived from wiladat, which means ‘birth’. The celebrations of Milad-un-Nabi are subdued as the same day also marks the death anniversary of the Prophet. The event is observed all over India with deep reverence and solemnity. This day is also declared as a public holiday. On this day the Holy Quran is recited and in special gatherings some religious scholars and poets recite Qasida al-Burda Sharif, the famous poem by the 13th century Arabic Sufi Busiri and Nats (poems praising the Prophet and his noble deeds) are sung. In Srinagar, the holy relics of the Prophet are displayed at the Hazratbal shrine.

Prophet’s death anniversary is often referred by the term Barah Wafat (barah means ‘twelve’ and wafat means ‘death’), which refers to the twelve days of his sickness leading to his demise. 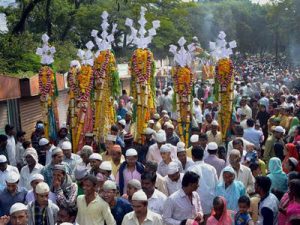 Muharram is the first month of the Islamic calendar and its first day is celebrated as the Islamic New Year. The 10th day of Muharram, known as the Yaum-Al-Ashura, is observed as a mourning day by the Shia Muslims in remembrance of the martyrdom of Imam Hussain Bin Ali, the grandson of the Prophet in the war at Karbala in 61 A.H. (680 A.D.).

In India, on the Yaum-Al-Ashura people generally wear black clothes and distribute juice or sherbat to everyone. During Yaum-Al-Ashura, taziyas (bamboo and paper replicas of the martyr’s tomb) processions as well as green alams (standards of Hazrat Imam Hussain’s army) made of silver, copper and brass, are carried through city streets, accompanied by young men beating their breasts in collective sorrow.

In most other parts of the Islamic world, with the exception of Iran, parts of Iraq and other Shia pockets, observing the tenth day of Muharram as a day of mourning is not considered desirable. On the contrary, Muharram is considered as one of the four blessed months in Islam and major Islamic events are believed to have happened on the 10th day of Muharram.

‘Shab-i-Qadr’ is a very blessed night which occurs on one of the odd nights during the last ten days of the holy month of Ramadan. Muslims believe that the Holy Quran was revealed to Prophet Muhammad during one of these odd nights, which are described as Lailat-ul-Qadr or the Nights of Power. During Shab-i-Qadr night vigils are observed and extra prayers are offered by all sects of Muslims. It is mentioned in the Holy Quran that the Lailat-ul-Qadr is better than one thousand nights.

‘Shab-i-Baraat’ or the ‘Night of Emancipation’ is observed on the night falling between the 14th and the 15th days of the month of ‘Sha’ban’ in the Islamic calendar. It is believed that people’s destinies are determined on this night. The Shia Muslims celebrate the 15th Sha’ban as the birthday of Imam Muhammad Al-Mahdi, the Twelfth Imam, who is believed to rid the world from oppression and injustice.

‘Shab-i-Miraj’ (‘Night of Ascension to Heavens’) is observed on the 27th day of Rajab, which is the seventh month in the Islamic calendar. It symbolises the night during which Prophet Muhammad is believed to have undertaken a journey to Baitul Muqqadas or Masjid-e-Aqsa at Jerusalem and thereafter to the skies on a horse-like celestial animal called Burraq and saw the paradise and hell and met the other Prophets there. The daily five prayers for Muslims – Fajr, Zuhr, Asr, Maqrib and Isha – are believed to have been ordained on this occasion.