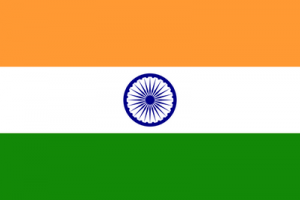 The National flag is a horizontal tricolour of deep saffron (‘kesaria’) at the top, white in the middle and dark green at the bottom in equal proportions. The saffron stands for courage, sacrifice and the spirit of renunciation; the white stands for purity and truth and the green for faith and fertility. The ratio of width of the flag to its length is two to three. In the centre of the white band is a navy blue wheel having twenty four spokes, which represents the chakra. Its design is taken from that of the wheel which appears on the abacus of the Lion Capital of Ashoka at Sarnath. The design of the national flag was adopted by the Constituent Assembly of India on 22nd July 1947.

The Flag Code of India, 2002, removed all restrictions on the display of the National Flag by members of general public, private organisations, educational institutions, etc., except in a manner that is insulting to the National Flag. The new flag code is an outcome of the seven-year long legal battle between the industrialist Navin Jindal and the Indian government in which the Supreme Court of India gave a judgement upholding the right of Indian citizens to fly the flag.

Making of the Flag:

The idea of a flag for India was initially mooted not by the nationalists but by the British government in the aftermath of the 1857 uprising, when the ‘Star of India’ flag was proposed in 1863 . The first nationalist thought on the flag for India came only in the beginning of the 20th century. One of the earliest proto-types of the national flag was the one designed by Margaret Noble (‘Sister Nivedita’) in 1905, which was a red square-shaped flag with 108 ‘jyotis’(oil lamps) all along its border and a “Vajra Chinha” (thunderbolt) in yellow with a white lotus alongside it in the centre. The words “Vande Mataram” were inscribed across the flag in the Bengali script. This flag was displayed by the Indian National Congress in its annual session at Calcutta in December 1906.

The first tricolour was unfurled on 7th August 1906 by Sachindra Prasad Bose, during a protest rally against the Partition of Bengal organized in the Parsi Bagan Square in Calcutta. This flag came to be known as the “Calcutta Flag” and had three horizontal bands of orange, yellow and green and the words “Vande Mataram” inscribed in the centre in the Devanagari script. It was designed by Sachindra Prasad Bose and Sukumar Mitra.

Another flag was unfurled on 22nd August 1907 by Madame Bhikaji Rustomji Cama during the Second International Socialist Conference in Stuttgart, Germany, which had green at the top, saffron in the centre and red at the bottom and eight lotuses in a row on the green band representing the eight provinces of British India. The words “Vande Mataram” were inscribed on the central band in the Devanagari script. This flag was designed jointly by Bhikaji Cama, Veer Savarkar and Shyamji Krishna Varma. The Home Rule movement of 1916 launched by Annie Besant and Bal Gangadhar Tilak had also adopted a flag.

In 1916, Pengali Venkayya started the Indian National Flag Mission in association with Omar Sobhani and S.R.Bommanji. He also authored a book ‘A National Flag for India’ and presented thirty different designs for the national flag. In 1921, at the request of Mahatma Gandhi he submitted a design for the National Flag which contained a spinning wheel on a red and green background. It was Lala Hansraj who suggested that a spinning wheel be depicted on the proposed flag.

However, Mahatma Gandhi felt that the flag did not represent all the religions of India.

Perhaps, the decisive moment for the adoption of a national flag by Indians was the Nagpur Flag Satyagraha of May 1923, led by Jamnalal Bajaj and others, which “transformed the flag from a relatively marginal symbol to a central element of the national movement”. In fact the first Flag Satyagraha was held in Jabalpur on 18 March, 1923 by Congress counsellors, which was then carried forward in Nagpur.

By 1929 another new tricolour was designed with white on the top, green in the centre and red at the bottom, with a “charkha” drawn across all the three bands. This flag was widely used during the freedom movement, though it was not adopted as the official flag of the Indian National Congress. On April 2nd, 1931, the Congress Working Committee appointed a seven member Flag Committee to look into all the suggestions for adopting a design for the national flag. Later, during the Karachi session of the Congress in 1931, the flag designed by Pingali Venkayya was adopted, which had three horizontal strips of saffron, white and green, with a “charkha” in the centre.

Adoption of the National Flag:

On June 23rd, 1947, the Constituent Assembly set up an ad hoc Flag Committee headed by Dr Rajendra Prasad and comprising of Abul Kalam Azad, Dr. B.R. Ambedkar, C.Rajagopalachari, KM Munshi and Sarojini Naidu. After three weeks of deliberations, the Flag Committee arrived at a decision on 14th July 1947 that the flag of the Indian National Congress should be adopted as the National Flag of India with suitable modifications, to make it widely acceptable. The debate on the Indian National Flag took place in the Indian Constituent Assembly for the first time on July 22nd, 1947. It was suggested that the ‘charkha’ or the spinning wheel be replaced by the Ashoka’s “Dharma Chakra” which appears on the abacus of Sarnath. The replacement of ‘charkha’by ‘chakra’ was done primarily because its spindle violated the rule calling for bilateral uniformity on a flag.

Hoisting of the National Flag:

Immediately after the declaration of independence, a group of seventy two women led by the Constituent Assembly delegate Hansa Mehta presented the tricolour to Dr. Rajendra Prasad. After India became an independent country, the national flag was unfurled for the first time at the Central Hall of the Council Hall (now known as the Parliament House) at 10:30 a.m on August 15th, 1947. In the afternoon of the August 15th, 1947, the first public flag salutation ceremony was held at the ‘War Memorial’ at the Prince’s Park near India Gate . The tricolour was hoisted for the first time on the ramparts of the Red Fort at 8.30 a.m. on August 16th, 1947 and the flag hoisting ceremony at the Red Fort started from August 15th, 1948 onwards.

The Films Division produced its first documentary film on the Indian flag in 1951 titled “Our Flag” in black and white, followed by a coloured version four years later. On May 29th, 1953, the Indian Flag, along with Union Jack and the Nepalese National Flag, was hoisted at Mt Everest. In 1971, the Indian Flag flew in space aboard Apollo-15. The tricolour was also flown for the first time over Dakshin Gangotri in 1982.

By law the Indian National flag has to be made of Khadi (cotton or silk) as per the strict specifications laid down by the Bureau of Indian Standards. The Khadi Development and Village Industries Commission hold the sole right to manufacture the flag, which in turn assigns the job to other regional organisations. Currently, the Karnataka Khadi Gramodyoga Samyukta Sangha is the sole official manufacturer of the flag.