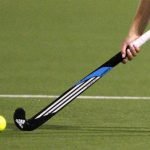 Hockey, which has been played in India since time immemorial, is the National Game of India. India had a glorious past in hockey with stalwarts like Major Dhyan Chand, Leslie Claudius, Balbir Singh Sr., Ajit Pal Singh, Udham Singh, K. D. Singh Babu, Mohammed Shahid, Dhanraj Pillay and others making a great name in the international arena. The Golden Era of hockey in India was the period from 1928-1956 when India won six successive gold medals in the Olympic Games.