The temples at Odisha (ancient Kalinga), afford some of the finest examples of the Indo-Aryan style of temple architecture, which is distinct from the South Indian style. A typical Orissa temple or ‘deul’ has a square building or assembly hall called ‘jagamohan’ in its front, which corresponds to the ‘mandapa’. Other structures like the ‘Nat-Mandir’ (Dancing Hall) and ‘Bhog Mandir’ (Hall of Offerings) were added to the temple structure in the later period. The lower upright portion of the ‘deul’ is called the ‘bada’, the tall middle portion is called ‘chhapra’, the flat fluted disc at the summit is called ‘amla’ and its finial is called ‘kalasa’. The Odishan temples are of the ‘astylar’ order, pillars being notable by their absence. 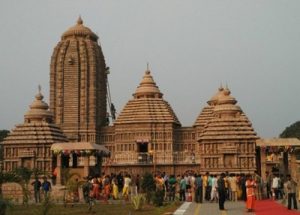 The Odishan temples can be divided into three main groups: (a) Early Period (c.750-900 A.D.) e.g. ‘Lakshmanesvara’ and ‘Parashurameshwar’ temples at Bhubaneshwar, (b) Middle Period (c.900-1100 A.D.) e.g. ‘Jagannath Temple’ at Puri and ‘Mukteshwara’ and ‘Lingaraja’ temples at Bhubaneshwar, and (c) Later Period (c.1100-1250 A.D.) e.g. ‘Sun Temple’ at Konark and ‘Raja Rani Temple’ at Bhubaneshwar. The ‘Lingaraja Temple’, built in the 11th century, is the finest of the 600-odd temples of Bhubaneshwar. The ‘Mukteshwara Temple’, built in the 10th century, is richly sculpted and is renowned for its stone arch at the entrance and extensive carvings of the tales from the ‘Panchatantra’. The 12th century ‘Jagannath Temple’ at Puri is known for its annual ‘Rath Yatra’.

The Sun temple at Konark (c.1250 A.D.) is fashioned like a ‘ratha’ (chariot) with the base of the structure having twelve giant sculpted wheels, each nearly ten feet high. Odisha is also known for its tantric Buddhist art, which developed from the 5th century A.D. and showed a strong influence of the Gupta Art, as is evident from the images at Lalitagiri, Udayagiri and Ratnagiri.