Evidences from literary and archaeological sources point out that painting as an art form has flourished in India from ancient times. The Sanskrit play Vishakhadatta’s ‘Mudrakshaka’ (4th century B.C.) mentions about numerous paintings or ‘Patas’, such as isolated framed drawings (‘Cauka-patas’), isolated paintings (‘Yama-pata’) and long scrolls of paintings (‘Dighala-patas’). Another ancient treatise ‘Vishnudharmottara’ describes the basic tenets of painting in the section ‘Chitrasutra’. It mentions the main elements of painting as: variety of form, proportion, infusion of emotions, creation of lustre and iridescence, portrayal of likeness and colour mixing to produce the effect of modelling. The existence of painted figures in many royal buildings is described in ‘Vinayapitaka’ another text belonging to the 4th century B.C. 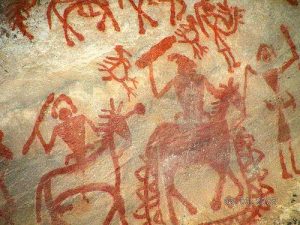 Pre-historic paintings and drawings of animals have been discovered in the Bhimbetka Caves in Madhya Pradesh. These paintings were executed on quartzite walls of rock shelters using minerals for pigments, the most common being ochre or ‘geru’ mixed with lime or water. The earliest paintings are of Mesolithic times followed by those of the Chalcolithic and the historic periods. These paintings are done in various shades of red, white, green and yellow colours. The site was also inhabited during the late historical times as is evident from paintings and writings in the Ashokan and the Gupta Brahmi scripts. The Mesolithic paintings of Narsingarh in Madhya Pradesh show skins of spotted deer left drying, which indicates that the art of tanning skins was acquired by man for clothing and shelter. In the paintings of this period musical instruments like the harp is depicted, along with various geometric forms like the spiral, square, circle and rhomboid.

In the early historic rock paintings of the Harappan period, the animals are depicted as half human and half animal. In the paintings of the later period, men are depicted as riding on animals such as cattle and elephants. The ‘Jaina Paintings’ are some of the earliest paintings which occupy a unique place in the history of Indian art, but very few early remains of these paintings have survived, which include the Sittanavasal frescoes of the seventh century . The most exquisite specimens of paintings belonging to the early Christian era are found in the Ajanta and Ellora and the Bagh Caves.

The Guptas period (4-6th centuries A.D.) is often described as the Golden Age of Indian Arts. The Pallavas also left behind excellent examples of paintings in temples. Royal patronage to painting and sculpture was given by the Cholas and the Palas. The earliest paintings of this period are on palm leafs and wooden covers of manuscripts, which can be described as the earliest examples of miniature painting in India.

Indian Paintings can be broadly classified into murals and miniatures. The Mural paintings are gigantic works that are executed on solid walls. These paintings have been in existence in India since the pre-historic times, the best examples being the murals of the Ajanta Caves and those in the Kailashnath Temple. In contrast, the Miniature paintings are executed on smaller surfaces such as paper or cloth. The Palas rulers of Bengal are considered as pioneers of miniature painting in India, while the art reached its zenith under the Mughals. The tradition of miniature paintings was carried forward by painters of different Rajasthani Schools like the Bundi, Kishangarh, Jaipur, Malwa and Mewar. The ‘Ragamala’ paintings are also classified under this category.

Indian painting, which was essentially religious in nature in the beginning, evolved over the years and incorporated diverse elements from India’s rich cultural heritage, besides getting exposed to the Greco-Roman as well as the Persian and Chinese influences. Indian paintings provide a continuation of aesthetics from the earliest civilizations to the modern period.

The broad categories of paintings include: murals, minatures, Mughal paintings and Rajasthan paintings.